We take a look at some of the biggest web shows launching this weekend... 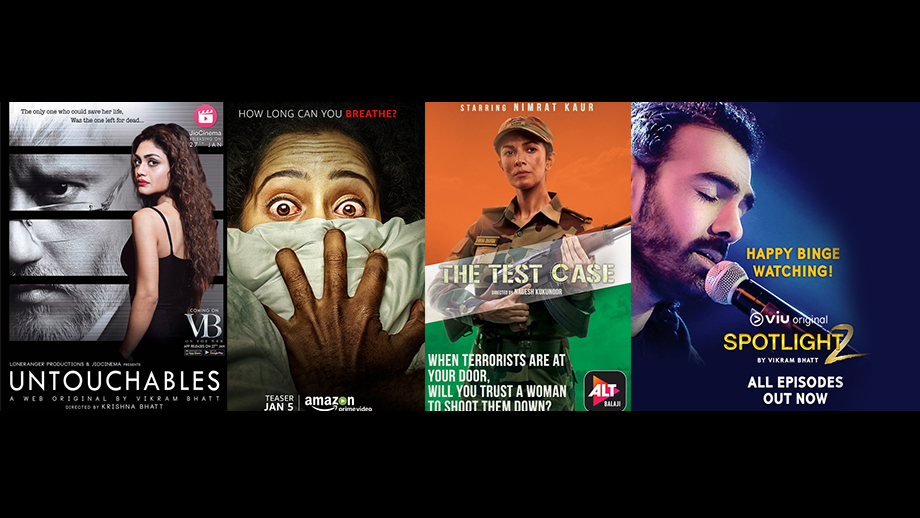 One cannot help but observe that there is a certain degree of impetuosity and pugnacity with which the web entertainment space is progressing in India. Articles are usually written about big Bollywood box office clashes, and now, catching pace with changing times, we have entered the realm wherein content giants are flexing muscles (simultaneously) to showcase their creative storytelling geniuses in the web space.

This Republic Day weekend is special. For finally, web entertainment has come out of its cynical contours and have sounded the bugle of competition with all might.

In a first of its kind scenario, reflective of the possibilities and pragmatism in the arena, four major content creator networks are going head on, all vying for supremacy and maximum audience share among web entertainment consumers.

The names in contention are Spotlight 2 by Viu and Vikram Bhatt, Breathe by Amazon Prime, Test Case by ALTBalaji and The Untouchables by Vikram Bhatt: simulstreaming on VB on the Web: Bhatt’s new App and Jio Cinema (Jio Digital).

All above mentioned shows beam this weekend and genuinely make for a great watch.

Viu as an OTT network has been an underdog in its ‘being there’ sense till now, however, 2018 is the year when it aims to paint the content skyline with some interesting shades. Spotlight 2’s promos make an impact and Karan V Grover seems to be living the character, thus ensuring wholesome entertainment.

The Untouchables stars TV star Sreejita De as the main lead. With this project, Jio has made its intention clear of not only throwing the hat in the ring, but also marching aggressively in the path of web originals.

Both Untouchables and Spotlight 2 are Vikram Bhatt (and team’s) brainchild (Loneranger). Vikram, after a successful career in movies, has chosen web as the preferred medium of storytelling, going on to launch his App as well.

Amazon Prime, after its power packed foray in the space with Inside Edge, past year beamed couple of under rated shows, however, in 2018, the network has up the ante. With the thriller Breathe, Prime’s marketing push has been utmost, as it intends to capitalise and make maximum gains with this high-profile high-budget endeavour, which has R Madhavan and Amit Sadh in prominent roles.

ALTBalaji, helmed by content queen Ekta Kapoor, has gone hammer & tongs in doling out new content in 2017 and the intent and commitment continues this year as well. Test Case was one of the flagship opening line up of shows for ALTBalaji, which hit a rough pause mode, but has returned with renewed vigour. Nimrat Kaur is a performer par excellence and given its women empowerment and nationalist armed forces touch, it (arguably) is the flavour of the season.

We would suggest watch each one of them. Enjoy the attempts. You will like some, dis the other. However, it will be triumph for web entertainment.

Spotlight is high on romance, drama and music. Breathe is about a father’s will to go any extent for his beloved child. Untouchables has shades of courtroom drama, romance and thriller. Test Case glorifies women power. Overall, each series makes for an interesting watch.

The writing on the wall has never been so evident. Yes, the ecosystem is still at a nascent stage, however, that’s not proving to be a deterrent for content creators to throw the stone in the air. Where it eventually would land, we hope, would be a sweet spot.

Let us know your thoughts in the comment section below or on our social media pages.