Review of  ZEE5’s Khaar – A riveting drama on salt, satyagraha and the steadfast spirit of Gandhiji
Subscribe Now
Digital | Editorial 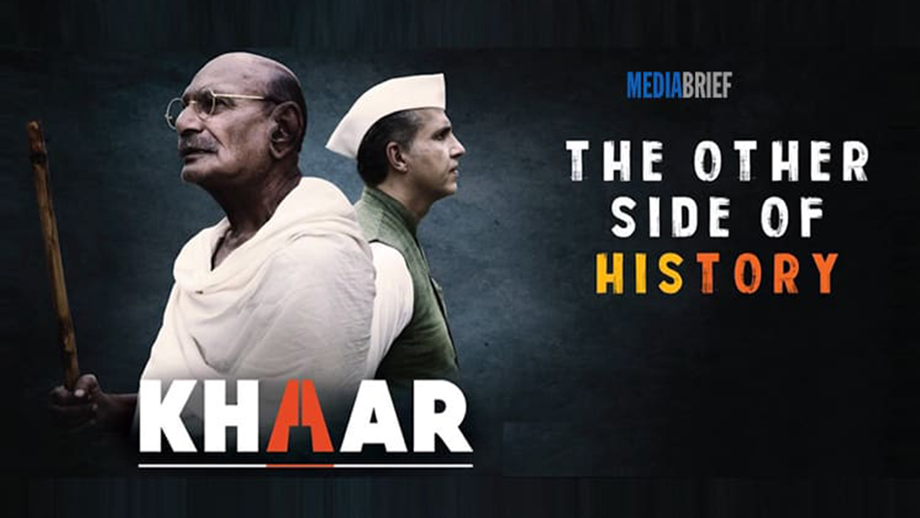 ZEE5, the digital arm of Zee TV, continues to amaze viewers with its eclectic offerings in web originals. Their shows span the entire spectrum of genres, from thrillers to psychological dramas and biopics. But where the OTT platform has clearly trumped its peers is in the docudrama space. Amidst the glut of whodunits, thrillers, comedies and slice-of-life series jostling for space in the crowded digital space, Zee5 has the gumption to stand apart from the crowd with its originals, which showcase fascinating events from the forgotten annals of Indian history.

The millennial generation is unacquainted with quite a lot of facts about the nation’s history and its stalwarts. What they do know is the cursory knowledge gleaned from history books, and bits and pieces of doctored info from Bollywood movies. That is the sum of the knowledge they have about the sons of this soil. Hardly anyone from this generation must be aware of how Lal Bahadur Shastri, the most upright Prime Minister to have led the country, met his end. Or how Gandhiji had to fight his own allies, to undertake the Salt Satyagraha, also called the Dandi March.

ZEE5, in its own small, modest way, has taken upon itself the onus of setting right this anomaly. After releasing the intriguing ‘Lal Bahadur Shastri’s Death – An Unfinished Story’ on Independence Day, the channel’s back with another infinitely interesting short movie, this time on the Father of the Nation, Mahatma Gandhi. The movie was screened on 2 October, Gandhiji’s birth anniversary.

Pertinently named Khaar, this latest original from the stables of ZEE5 treads the unbeaten path. It delves into the turbulent times of India’s freedom struggle against the British Raj, and plucks a leaf from the sepia-tinged sheaves of our glorious past. It is a short movie, chronicling Gandhiji’s famous Salt Satyagraha. But why make a movie encapsulating this seemingly nondescript event, you wonder. After all, we know that Gandhiji marched on foot from Sabarmati Ashram to Dandi to break the Salt Act. It’s there in our history text books and we all have read about it, for heaven’s sake.

That’s where you’re wrong, my friend. Because what we all know about the Dandi March isn’t even the tip of the massive iceberg that was the Salt Satyagraha. Khaar, in an easy-going, yet piercingly direct way, tells us how this earth-shattering event transformed the course of Indian history. It goes behind the scenes of this historical narrative and lays bare the realities of that time, realities that threaten to be lost to us forever, unless captured on celluloid, for posterity. And therein lies the significance of Khaar, and others of its ilk.

Docudramas like Khaar apprise us of so many buried truths, facets and aspects of those times. Like, did you know, Gandhiji had to go against everybody, even his trusted lieutenants like Jawaharlal Nehru, Sardar Vallabhbhai Patel, Maulana Azad and the entire Indian national Congress, just about everybody, to undertake his Salt Satyagraha? And, did you know the what, why and how of the draconian Salt Act of the 1800s?

Well, watch Khaar and you’ll be surprised at how much we don’t know about our own history, even about one of the most chronicled man in Indian history– Gandhiji.

Khaar tells us how the Dandi March brought the struggle for independence to the streets, galvanized people from all strata of society to join the fight for freedom; and turned the independence movement into a mass movement. It brought women out of their homes, to stand as one and fight shoulder to shoulder with the menfolk for small allowances like making salt from their own land.

What was a small movement, conceived and executed singlehandedly by Gandhiji along with a handful of his satyagrahis, soon turned into a countrywide agitation; and the small band of marchers turned into a ‘white flowing river’.

Khaar is a well-researched, superbly written movie, which throws up interesting information in bite-sized segments, thus making it easier to assimilate and understand for the viewers. Its ingenious direction and gripping screenplay – enacted segments, interspersed with actual footage from those times, and peppered with expert views from political doyens, historians, professors and heads of departments – makes it a worthwhile and enthralling watch. It keeps us hooked till the very end, even as it makes us want to dig deeper into the subject. Brilliant stuff, this. Suhail Tatari has wielded directorial duties with consummate skill, preciseness and dexterity.

The docudrama features Surendra Rajan as Mahatma Gandhi, Sanjay Gurbaxani as Nehru, Amit Singh Thakur as Sardar Vallabhbhai Patel, Rajesh Singh as Khan Abdul Gaffar Khan and Tarakesh Chauhan as Maulana Azad. Every actor has played his part to perfection. All the actors have done a really good job. A special mention here for Surendra Rajan – his mild mannerisms, expressions and getup bestow on him a spitting likeness to the Mahatma from Sabarmati.

Docudramas of this kind are the need of the hour, as its high time the youth of the country is brought face to face with its past and the events that made India what it is – the birthplace of non-violence, and an exemplar of satyagraha (insistence on truth), for the world to follow. And we have just one word to say for this brave attempt from ZEE5 – bravo, guys!