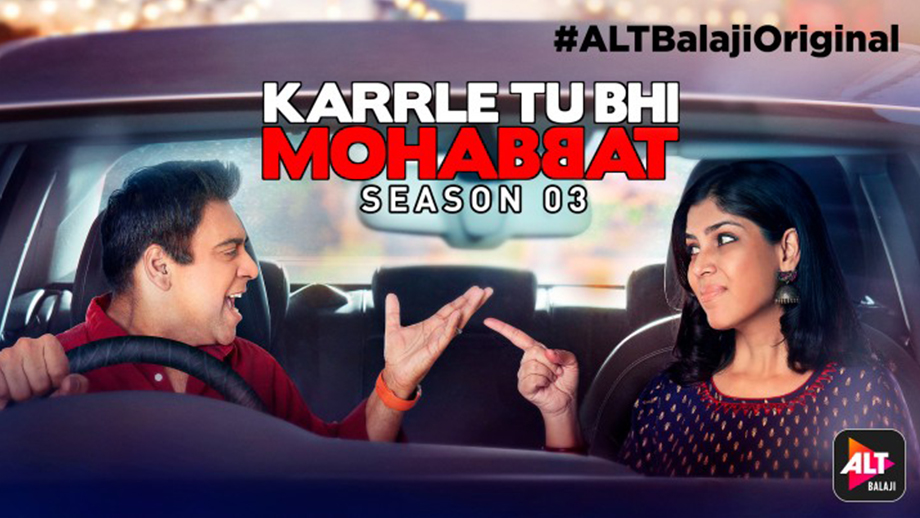 When you have a franchise, the pressure to raise the bar is quite high on the makers. Unfortunately, Balaji Telefilms let me down with ALTBalaji’s Karrle Tu Bhi Mohabbat Season 3, starring Ram Kapoor, Sakshi Tanwar and Hiten Tejwani.

Sadly, this mature romance saga is too slow for my comfort level. Last night I checked it out till episode #4 and still have no clue as to what caused superstar Karan Khanna (Ram) and Dr Tripurasundari “Tipsy” Nagrajan (Sakshi) to call time on their marriage, which is the main leitmotif of the 2019 season. Agreed you want to keep it a suspense to hook in viewers, but the drama is not really engaging to me at least. I guess the writers have gone overboard on the realistic zone, hence the hard drama that keeps you engaged to your phone’s small screen seems missing.

Also, with the story oscillating between the past and the future, there is some disjoint. We sure would love to know what magical therapy Karan underwent, that cured him of his paralysis. Also, if booze was a major issue earlier, how come it is not a hindrance now?

Ram is a class actor, bringing out the contrasting touches to his personality (caring lover to rude, careless playboy) with elan. Just one question — do we still have the paunchy superstar as in the sixties and seventies?

He also brings out the frustration actors face when successive films tank, when the same media that would worship the ground they walked on turns turtle. No wonder they adorn the I care a damn attitude when on the top. The selfish, friendless industry is also shown via Aryan (Vatsal Seth).

Sakshi on her part continues to do justice as the caring detox doc. Her scenes with her daughter, Piya (Arshia Mehta), are fun. The little kid is over smart as most of their generation is. Her fear of losing Piya to the all-powerful and scheming Karan was presented well. One more positive of web is that none of the characters are over-dressed as on TV. Tipsy dresses like a normal professional.

Hiten Tejwani also fits his lawyer character Ved like a glove. The scene where he stands up to Karan’s bullying gives heft to his personality. Web is giving Hiten a chance to come out of his lover boy image. Hope the makers add a twist, for one-dimensional layering loses fun. Agreed you have one bad guy – Udayan (Sandeep Baswana – his character is yet to open up), but have we not heard, more is merrier?When Ekta can push all boundaries, why did she not show Tipsy making out with second hubby, Ved? So we still believe in the old dictum that the man can play the field while the woman can’t think beyond hubby.    Hope her lover before marriage, Palash, also returns to further muddy the waters.

Karishma Tanna is good as producer Zoya, who keeps showing Karan the mirror. She cares for him but he always spurns her. She looks chic in dresses.

In a film environment besmirched by the #MeToo campaign, the allegations of molestation on Karan by a jilted co-star, Sanam (Iris Maiity), should be an engaging watch. Zoya tried to bring in Tipsy as the wife to support Karan. This always happens in real life as well. Plus here Tipsy genuinely believes that Karan might be all bad but he’s not a pervert. Sanam does justice to the concept, Hell hath no fury like a woman scorned.

The run length of each episode is just right. Had it been more, it would have become a real drag. The music and photography is very easy on the eyes/ears. But as mentioned above, since we are used to over the top stuff, suddenly something lighter becomes jarring. But then someone needs to change the ball game and who better than Ekta Kapoor to lead the charge.

Although Karan swears a lot, he does it only when he is angry, so it appears very natural. There is no overdose of sex, as also was the case with the prior seasons. The makers could have very easily had Karan exploit lovemaking scenes with other girls as part of his bad alter ego to garner eyeballs.

Just going by social media chatter, we are not hearing much about Karrle Tu Bhi Mohabbat. There is no clear online rating system, so we have to go by what the makers say. Hope BARC’s online matrix comes into play, as then we will know if the online space is really giving TV and GEC a run for its money, as claimed by many.

We at IWMBuzz.com give 2.5 out of 5 for Season 3 of Karrle Tu Bhi Mohabbat.