Broken But Beautiful Season 2 is streaming and it's riding on the back of its first season, and we at IWMBuzz review the show in depth and detail… 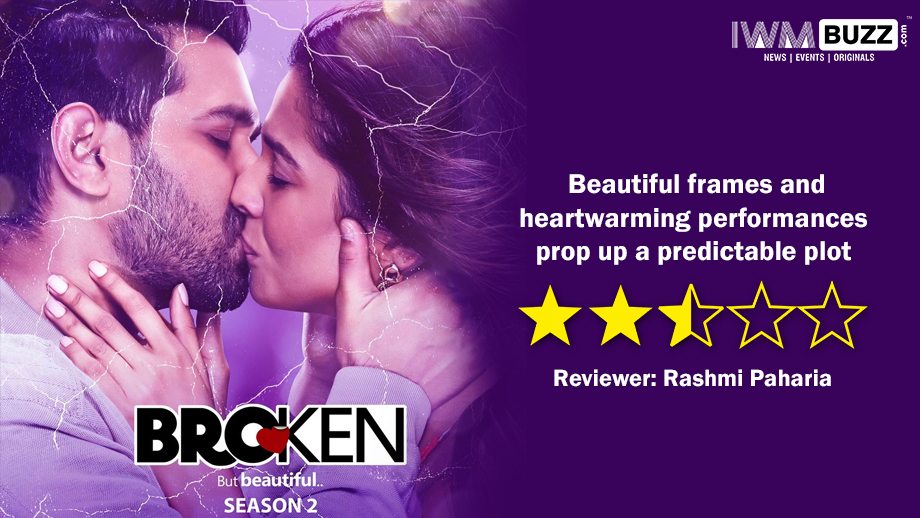 Who fixes broken people? It is only other broken people, ones who’ve already been shattered… And therein lay the deliciously warm, yet heart-wrenchingly raw tale of Broken but Beautiful.

Two irretrievably broken souls, Veer (Vikrant Massey) and Sameera (Harleen Sethi), each shattered by painful partings from their respective loves, found solace in each other, exorcised the ghosts of their past and finally, broke free from the shackles of the dejection and despondency that bound them. It was a tale of love, longing, denial, despair, acceptance and finally, catharsis….that two broken people found in each other.

Broken but Beautiful was a captivating tale of two hearts of the same wavelengths, joining together to create a joyful harmony of sublime music, of finding love again.

Veer and Sameera were meant for each other in every way, but yet, in Season 1 of Broken But Beautiful, they parted ways, leaving the season hanging on a stunning cliffhanger; and leaving viewers wondering what was in store. The primary question on the minds of every fan of soppy, syrupy romantic stories such as Broken But Beautiful was this – will Veer and Sameera find love in each other? Will they finally get together? And they waited breathlessly for Season 2 to take shape and begin streaming to get the answers to their questions.

That highly-anticipated Season 2 has finally arrived on ALTBalaji and ZEE5, and let us tell you that it lets slip plenty of answers. Our only grouse is that takes quite a long time – ten episodes – and a pretty long-winding route to arrive at said answers. The season begins with Sameera and Veer sticking to their pre-decided plan of not getting together, lest it be a relationship on the rebound. Veer moves to Bangalore to learn the art of cultivating vineyards and making gourmet wines, while Sameera learns the art of living life to its full potential – having fun at work and at play. Both have new loves in their lives, Debbie (Anuja Joshi) in Veer’s, and Ahan (Gaurav Arora) in Sameera’s.

Both are happy in their own spaces, until one day they meet again. And realize that they still have feelings for one another. Each finds flaws with the other’s relationship. Sameera thinks Veer has become exactly like she was once upon a time – loving beyond moderation; stalking Debbie, even if out of misplaced concern; and smothering her in love and ardour to the point of suffocation – the exact traits that had left her broken after breakup with Kartik (Jitin Gulati).

Veer thinks Sameera and Ahan are simply role-playing – taking forward a love that appears more contrived than real. At a point in the mid of the show, he realizes that he wants Sameera in his life with a passion that threatens to consume him, but she refuses him yet again. Long-winded shots of a broken Veer trying to overcome the rejection follow.

To cut a long story short, ten episodes, one breakup and one short-lived marriage later, viewers eventually get some tangible answers. What are they? We’ll leave that for you to find out.

While Season 1 had riveted viewers with its innovative storyline and compelling drama, Season 2 seems contrived and pointless. Too much of a good thing doesn’t do much good for anyone, let alone viewers that are quite jaded by the end of the season that does nothing but go round in circles.

Even the sundry characters of Season 1 that had added their own special flavour to the narrative seem of the cardboard variety in Season 2. Ishanvi (Poppy Jabbal) doesn’t seem as spunky any more. Kartik doesn’t have much to do–a waste of a good actor–though his wise words in the last ten minutes of the last episode are quite weighty and profound. Agni (Akriti Singh) overdoes her firebrand character, yet is quite lovable this season too.

A cameo by Mukul Chaddha (who plays Jagdeep Chaddha, the boss, in Hotstar’s The Office), is the only one that makes us laugh with its hilarity. He plays a shrink in the show, Sameera’s shrink, and he brings an element of humour to the otherwise drab proceedings. For, it must be said, this season is extremely low in humour and high on rhetoric. Thank god for shrink Khatri then!

A stand-out feature of recent Ekta Kapoor web shows has been their music. And Broken But Beautiful Season 2 doesn’t disappoint in that department. The songs are soulful and mellifluous, giving you a warm, fuzzy feeling inside.

As for the new entrants in the season, Ahan, played by GauravArora, and Debbie, played by Anuja Joshi, the least said the better. It’s not that the actors have done a bad job, no. Both have done justice to the roles assigned to them. It’s just that the characters have been written so poorly that they simply get on your nerves. Ahan exasperates you with his over-enthusiasm, over-fondness for Sameera, in fact, over-everything. In the end, you’re left rolling your eyes in sheer ennui.

Debbie is a contradiction of sorts. One episode, she’s vexed with Veer smothering her in love – she gives off the vibes that she’s not so into him and is carrying on the relationship only for the great lovemaking (apparently, as she tells Sameera, Veer is a stallion in bed – her words, not ours –we would never stoop to using such clichéd phrases). The very next episode, she’s screaming blue murder when she discovers that Veer has cheated on her. She does a good impersonation of the wronged woman who’s hurt and shattered by her guy’s infidelity, when she seemed just the opposite an episode ago.

Neither of the two characters gets the audience invested in its depth and scope. Both characters test your patience, leaving you on the verge of boredom. What redeem the season are its beautiful frames, excellent cinematography and the heart-warming performances of the two leads, especially, Vikrant Massey’s, if we may. Harleen Sethi looks beauteous on screen, and gives a mature, restrained performance. She’s pretty and poised in every scene she features in.

Vikrant Massey takes centre-stage again in the acting department. He was the highlight of Season 1, and he’s the highlight this season too. He’s head and shoulders above the other actors, making them seem positively mediocre, with his refined, sophisticated acting chops. Here’s an actor that’s matured like fine wine with every outing, and the result is quite fascinating and, intensely appealing.

A stand-out feature of recent Ekta Kapoor web shows has been their music. And Broken But Beautiful Season 2 doesn’t disappoint in that department. The songs are soulful and mellifluous, giving you a warm, fuzzy feeling inside.

Reshu Nath’s writing this season is quite underwhelming, as compared to last season. We definitely expected better. Harsh Dedhia’s direction is quite adequate, given the material at hand. On the whole, it’s an underwhelming season. We had expected pyrotechnics after the success of Season 1, but were handed faulty, last-year’s firecrackers instead.

Nevertheless, 2.5/5 is our rating for Broken But Beautiful Season 2.