Sidehero is a sparkling exemplar of self-deprecating humour in story-telling, the kind that was the undisputed domain of the Robin Williams’ and Jim Carreys of the world 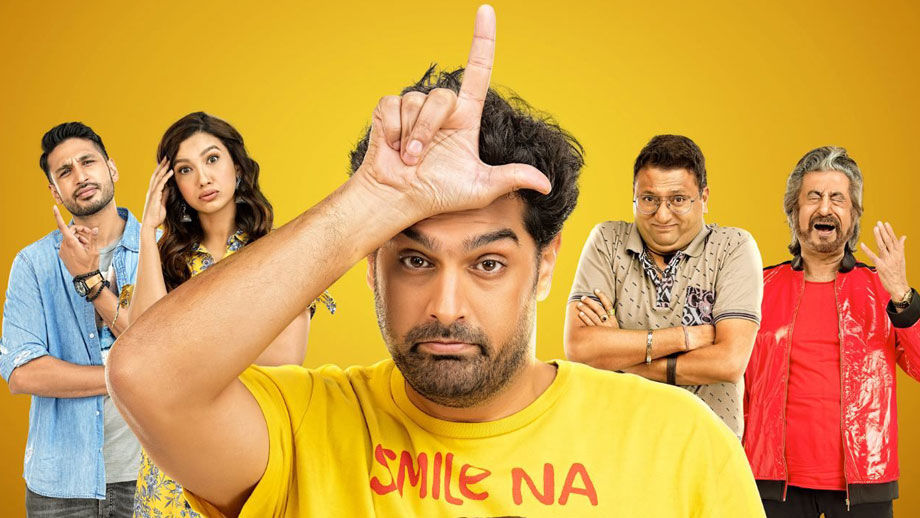 For those of you who’ve been living under a rock, Eros Now is the digital arm of Eros International, one of the leading lights of the Indian film industry with tons of superhit Bollywood flicks to its credit. With the release of Sidehero, Eros Now has jumped onto the originals bandwagon in the digital realm, a development that spells pleasurable anticipation for audiences. After all, maestros don’t bother about the canvas. Their task is to create masterpieces. What say?

So, how does Sidehero measure up to the standards set by Eros’ Bollywood magnum opuses? Let’s find out!

At its heart, Sidehero is a tongue-in-cheek chronicle of the all-pervading Indian film industry and what makes it tick. On the surface, though, it is the story of an actor desperately trying to make it big in Bollywood, but stuck with being a sidehero – a persona non gravitas in the film industry –expendable, replaceable and unessential.

The term, ‘sidehero’ is a quaint and quirky one, native to, and ubiquitous in, the Indian film industry. In Indian flicks, the side hero is an actor, who, though good enough to be the main lead, has to settle for second best, always. And another quirk that goes with the territory is – once a sidehero, always a sidehero. Once relegated to the category, rarely has any actor succeeded in breaking out of the mould to make it as hero in Bollywood.

Sidehero stars Kunaal Roy Kapur as…..himself. And what a masterstroke of casting! The character is tailor-made for Kunaal and fits him like a glove. Kunaal is the quintessential Bollywood sidehero – he’s got it all– looks, considerable talent and an impressive lineage. He’s been in the industry since ages. Yet, he’s trapped in the sidehero mould for perpetuity- always on the outside, looking in. Aye sire, this character is right up his alley. And none could have pulled off this role better than Mr Kapur.

Director, Rohan Sippy, knows this and exploits it to the hilt, bestowing a surreal realism to the storyline. So Kunaal pokes fun at himself, takes digs at his non-existent career, and indulges in good-natured self-mockery. Net result- Sidehero is a sparkling exemplar of self-deprecating humour in story-telling, the kind that was the undisputed domain of the Robin Williams’ and Jim Carreys of the world. And Kunaal Roy Kapur excels at it with consummate ease.

The story is about Kunaal, a struggling actor in Bollywood, while Gauahar Khan is his estranged wife. Singer-songwriter, Arjun Kanungo, makes his acting debut in the role of an aspiring actor and Gauahar Khan’s suitor. The series opens with Kunaal playing hero in a flick – a role he’s got with great difficulty – with Tillotama Shome as the heroine. As the camera starts rolling, Kunaal stands to enact the scene, and then, gasp–his dhoti (it’s a wedding scene and he’s the groom) comes undone and his privates are up there on the internet, for all to see. And, of course, in the age of Twitter and WhatsApp, the clip goes viral with the speed of light. The scene is outrageous, to say the least.

Sidehero is light-hearted, breezy and very, very intelligent. It’s the kind of show that Indian audiences yearn for, but get to watch only on western OTT platforms and TV channels. The direction is the star of the show, while the writing is the glittering jewel in its crown

Tillotama, eyeing his crotch cheekily, tells him, in a typical Bangla accent, to cover up his lyangcha-chomchom. On Googling the two words, we discovered that lyangcha-chomchom are Bengali sweets that look uncannily similar to…..ahem….sausages! What a singularly unique description of….err….a man’s manhood.

Hilarious! Take a bow, writers, Nipun Dharmadhikari and Anuvab Pal. Those in the know must be aware that Anuvab Pal is one of the founding members of the nascent stand-up comedy scene in India.

To come back to the story, this incident spells professional hara-kiri for Kunaal. He’s ousted from the movie, and his starry dreams go kaput. He fires his manager, Natasha, blaming her for the fiasco and hires Veera (Gopal Datt) to manage his affairs from there on. Veera promises to bring Bebo to Kunaal’s home for an Eid and Mutton Biryani party. Unfortunately, Bebo happens to be a star goat that Veera manages! The media hunts for Bebo and the mutton for the biryani in Kunaal’s home. As they close in on the goat, taking it to be the mutton-to-be, Kunaal hollers- “Na khaunga, na khaanedoonga”, in an obvious reference to he-that-shall-not-be-named and his fekuisms. The scene had us laughing our guts out!

In the meanwhile, his ancestral property, bequeathed to him by his granny, is attached by his bank due to loan default –he’d taken a loan to produce his own launch-pad, Zindagi Humari Aur Tumhari, (he lovingly calls it ZHAT), which flopped miserably. Kunaal moves in with Veera in a hostel-of-sorts for Bollywood wannabes and castaways.

Rib-tickling sequences follow, that have us laughing till our sides hurt. The series is written with a firm tongue in cheek, and is rife with humour that is as sharp as a razor’s edge.

But that’s not what lends Sidehero its glittering brilliance. For, brilliant it is. No; the brilliance comes from the way the series deftly touches upon the myriad idiosyncrasies of the film industry. No topic is taboo for the writers of Sidehero; no controversy, off limits. From the infamous nepotism debate to the Bollywood penchant for making appearances at weddings, inaugurations and err….even funerals, in lieu of astronomical sums of money, nary an issue is out of bounds for the series.

Makers, Eros Now, have labelled their creation a mockumentary, and aptly so. For, Sidehero mocks and lampoons Kunaal’s filmy career – or the lack of it–in a satirical, irony-laden narrative that is as hilarious as it is sardonic.

Kunaal Roy Kapur, sandwiched between two successful siblings– older brother, Siddharth Roy Kapur, is producer extraordinaire and a legit member of Bollywood glitterati, while younger sibling, Aditya Roy Kapur, is a certified star, could have taken the easy way out and got his brothers to pave his way to success. But, as Gauahar points out to a director duo that’s pestering Kunaal to get his brother, Sid, to finance their film in exchange for the hero’s role for Kunaal, when it comes to nepotism, Kunaal is Kanganavadi- a clear reference to you-know-who and her battle against nepotism in Bollywood. Mighty courageous, if you ask us.

Sidehero is chockfull of such witticisms that take a dig at the banality of the film industry. Any publicity is good publicity for our demigods with feet of clay, a fact cleverly touched upon in one of the episodes. In another, Konkona Sen Sharma, playing herself (what else!), makes a video which she calls, My Voice, a comical take on Deepika’s video, My Choice. She wonders why her video isn’t getting too many ‘likes’ on social media. Maybe, she says, coz it’s a Sunday…the internet is closed…! Konkona is terrific, and pulls off a hilarious parody of a method actor who goes to any lengths to get into the skin of her character.

In another episode, Kunaal Roy Kapoor launches into a fervent Shylock-esque monologue on the plight of the sidehero in the industry– Hath not a sidehero eyes? Hath not a sidehero hands, organs, dimensions, senses, affections, passions; fed with the same food, hurt with the same weapons, subject to the same diseases……he goes. And thus he gets his point across to the celebrated Shakespearean theatre director- a Naseeruddin Shah look-alike….in true Shylock fashion.

Sidehero superbly brings forth the ephemerality of Bollywood, giving us a no-holds-barred view of its grand-on-the-outside-but-hollow-on-the-inside nature. Nowhere does it preach or sermonize, taking recourse to levity to say its thing. The plentiful cameo appearances lend credence, authenticity and an element of fun to the proceedings. The cameos blend into the story seamlessly, adding to the story, rather than taking away from it. There’s Shakti Kapoor, Abhishek Bachchan, Vijay Krishna Acharya, Sumeet Vyas, Konkona Sen Sharma, Tillotama Shome,and yes, controversial stand-up comic, Kunal Kaamra, too.

Sidehero is light-hearted, breezy and very, very intelligent. It’s the kind of show that Indian audiences yearn for, but get to watch only on western OTT platforms and TV channels. The direction is the star of the show, while the writing is the glittering jewel in its crown. Kunaal Roy Kapur is outstanding in his part, displaying a beguiling candour and ardent earnestness in his acting. He holds the series together with admirable ease, carrying it to glory on his capable shoulders. Gauahar Khan has matured into an accomplished actress, getting better with age, just like fine, vintage wine. She gives a restrained, weighty performance, the picture-perfect foil to Kunaal’s chaotic shenanigans.

Gopal Datt is exceptional as Veera. His poker-faced dialogue delivery makes his already funny lines a laugh riot. Watch Sidehero for the brilliant camaraderie between Kunaal and Veera. Veera is the Barney to Kunaal’s Ted. He is the Mike to Kunaal’s Harvey….get the gist? And boy, do they make merry together!

Arjun Kanungo is a revelation. He is totally at ease before the camera, not letting on even once that he’s a green-horn in the realm of acting. His is a clean and crisp performance.

Sidehero is perfect binge-watch material. Eros Now’s tour de force has us engrossed till the very end. It closes on a heart-warming note and we just can’t wait for Season 2 to come around.