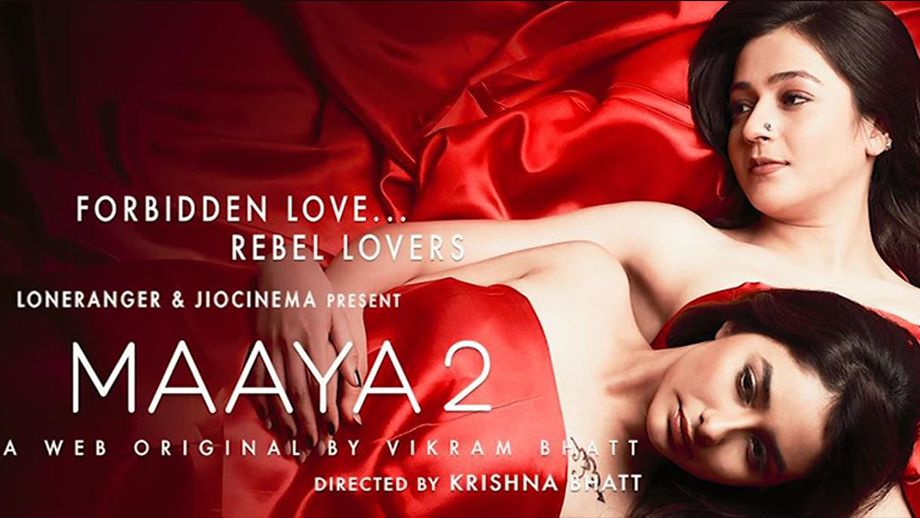 Now with Maaya 2, Krishna as the Captain of the Ship has not only gotten wiser in handling sensitive subjects, but has also dealt with the sensitive theme with utmost dignity and poise.

Maaya 2, which is set around the ‘questionable’ LGBT love story, has indeed raised the bar of conceptualization and story telling!! Dealing with such a sensitive topic is certainly not a cake-walk!! It needs all the subtlety in romance, and the sheer power to tell a story which directly touches the hearts of people!!

Must say, Maaya 2 is a beautiful tale of two girls, of opposite attributes. Ruhi (Leena Jumani) is the stronger one in the relationship, always knowing that she is a woman who gets attracted to the same sex. On the other hand, there is Simmi (Priyal Gor), the diffident, responsibility-bound girl who does not even realize initially that she belongs to a community that is ridiculed.

The story starts with Simmi’s life being caught in a complete mess, with her so-called boy friend Puneet (Pranav Sachdev) being a manipulative jerk!! Ruhi and Simmi’s meet-up, followed by Ruhi’s immediate attraction towards her are shown well. Also, Ruhi is instantly made aware of Simmi’s problems with her boy friend.

What follows after is the flow of love with high intensity, and with it, Simmi and Ruhi’s life changes. At this juncture comes in talented news reporter Beena (Anangsha Biswas) who goes on to be the biggest confidante to the two girls.

Simmi’s struggles with Puneet act as a precursor for love between Simmi and Ruhi. As they say, love has no barrier, and it so happens here too. Simmi is drawn into loving Ruhi and the two find solace in each others’ arms.  But problems with Puneet force Simmi to take drastic steps like consuming an overdose of sleeping pills, and also getting into knee-jerk reactions of moving away from Ruhi.

But all this makes Ruhi stronger as she along with her friend Beena decides to employ the hot and sexy Shanaya (Tanvi Thakkar) on duty to gatecrash with Puneet on bed. The idea is to spoil his image in public, and get rid of him forever. But the smart and money-hungry Shanaya complicates matters by siding Puneet and blurting the truth.

This is followed by a series of mind games, which we so not intend to leak out, in order to keep the broad story under cover. Furthermore, the most unfortunate death, the whodunit intrigue, and the manner in which the girls fish out the proof for the killing have a clean and neat flow.

Also the entry of the Minister Dinanath (Amit Singh Thakur) at this stage, adds more meat to the story. The sexy and sensuous love scene of the girls then plays its trick, which is followed by the hospital and the video-going-viral drama. The climax is indeed palpable, providing a big relief.

Talking about performances, Leena Jumani and Priyal Gor are such naturals when it comes to acting. Guess this work of theirs will remain as one of their most noted work throughout their careers. Kudos to them for taking up such a role!! Guess they had done their homework, researched a lot on this particular community, before gearing up for action time. They are effortless in their love-making scenes, and not even once does their effort look shabby. Just as they are very comfortable in their love scenes, they have the same degree of command over their emotional scenes.

Pranav Sachdev as Puneet excels. From being a sex-hungry lover to a big-time schemer, who also reaches the borderline of being a psychopath, he has brought out his emotions, aggressiveness well. His scenes with the lighter caught our attention!!

An actor to notice and applaud is Anangsha Biswas. As Beena, she has done a good job. Tanvi Thakkar as Shanaya is good in the part she played. Vikas Grover as the friend Roy is a real sweet-heart that every friend will love to have. Senior actor Amit Singh Thakur has given a restrained good performance, in the limited scenes he gets.

The direction is brilliant, with Krishna scoring high, especially in capturing the real essence in the love of the two girls without it being ugly or obscene. Of course, the writing power of Vikram Bhatt has its say in every scene!!

If you look at the subject overall as a love story, we must say it comes across as a beautiful love story. But the problem (for few) will arrive where the love story is not a straight one, but between two females. Yes, true that we live in a techno-age, wherein we need to have a broad-minded approach to seeing life way differently from how probably our ancestors would have seen. Yet, there will be a sect of people who will still not approve of the thought of relationships prevailing between the same sex. Having said this, Maaya 2 will certainly be a great watch for people who have the liberal thought process of accepting the LGBT’s as one in the big common community.

Getting back to the complexity of the subject, the scene where the father and mother of Simmi accept their daughter’s lesbian relationship, like not even thinking twice about it, is a bit too much to handle!! Wonder how many parents will react in a similar way, if put in their shoes….

Overall, if we say, a sensitive subject handled really well by Vikram Bhatt and his team… Yes, the debate on whether the society on the whole will accept and embrace the LGBT community can go on and on…. But for those who are liberated, Maaya 2 is indeed the change and trendsetter on the web space.

We at IWMBuzz.com credit the series with 3.5 out of 5 stars.