IWMBuzz brings to you details of Anushka Shetty and Prabhas's love story. Read the story for more details A lot has already been said and written about Anushka Shetty and Prabhas’s love story. Although, the couple have never clarified or confirmed it themselves till now, the fire in their sizzling chemistry speaks volumes in itself.

The duo reportedly met for the first time on the sets of the movie Billa in 2009 but their closeness and camaraderie was visible the most in the 2013 blockbuster Mirchi. In fact, there’s a proposal scene in the movie that made fans go bonkers seeing Prabhas and Anushka together. Seeing that scene, you might just feel Prabhas proposed Anushka for real.

The chemistry continued further in the global hit Baahubali and Baahubali 2 and it has simply been on the rise. But since then, both haven’t worked in anything together which has made fans upset.

So do you think they should again do a movie together and take their story forward? After all, an incomplete love story is never desired, right? Well, all we can do from here is sit and wish that things blossom for Prabhas and Anushka. For more such updates, stay tuned to IWMBuzz.com. 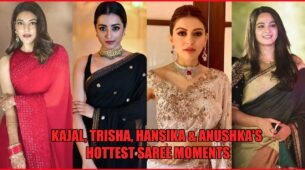