Check out who among Angelina Jolie, Megan Fox, Kristen Stewart, and Eva Green looked sexy in the mermaid dresses.

Angelina Jolie has been one of the greatest fashionistas since the 90s days. She has come up with various new trends, and also followed the existing ones. A couple of years back, in the 2018 British Academy Film Awards, she was seen wearing a black velvet off-shoulder mermaid dress by Ralph & Russo for the red-carpet event.

On the other hand, Megan Fox was no less. She looked extremely gorgeous in the pink strapless lace dress. She was seen wearing it in the 70th Golden Globe Awards. She stole everyone’s attention with her super-hot and sassy looks.

Whereas, Emma Watson looked so stunning in the white chiffon split mermaid dress, in London’s Leicester Square for the premiere of Noah (2014). She has been seen wearing sassy outfits all the time. But, her looks from the Noah (2014) red-carpet is unforgettable.

Kristen has been seen wearing mermaid dresses and gowns, more than a couple of times. She was seen wearing a blue mermaid dress in Vanity Fair’s Oscar Party, 2010. The star was also seen wearing a Sexy Sheer Mermaid V-Neck sleeveless Chiffon Gown for a Prom Party during the 2017 Oscar. Kristen once posed in a beautiful mermaid dress with Robert Pattinson, where she looked so elegant.

Last but not the least, Eva Green, the French actress was spotted in Black mermaid dress in one of the evening parties. She did a photoshoot in that, where she looked like a beauty queen. She looked no less than others.

It’s hard to choose who looked bold and sexy in the mermaid dresses. Why don’t you guys tell us? Leave a comment down below.

Also read: Beat The Heat With These Adorable Summer Outfits From Angelina Jolie and Gal Gadot 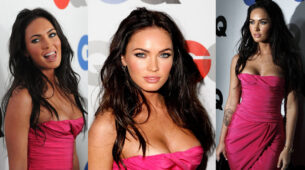 Megan Fox Looks Wild In Her Pink Off Shoulder Outfit Angelina Jolie In Maleficent Or Lara Croft Tomb Raider: Which Was Her Most Loved Role? Oops: Have A Look At Emma Watson Wardrobe Malfunction At The Premiere Of Harry Potter In 2009 Kristen Stewart, Jennifer Aniston To Kim Kardashian: Actresses Who Went With Only Blazer & No Shirt Look Meghan Markle Or Angelina Jolie: Who Rocked The Leather Skirt Look To Perfection? Kristen Stewart, Megan Fox To Emilia Clarke: Have A Look At The Hottest Winter Collection

Angelina Jolie Or Margot Robbie: Who Has The Sexiest Looks In White Gown?