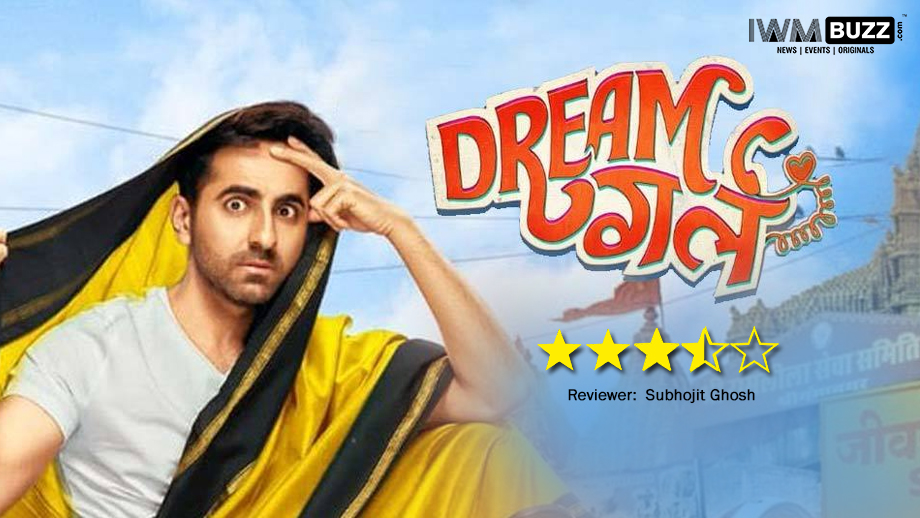 Whenever we hear the word ‘Dream Girl’, especially in Bollywood, we can only talk about one lady and that is the eternally gorgeous Hema Malini. Having earned the tag of ‘Dream Girl’ in her prime, no other actress has managed to take that forward and it still belongs to her. When Ekta Kapoor announced that her next project would be ‘Dream Girl’, starring Ayushmann Khurrana and Nushrat Bharucha, everyone thought it would be about Nushrat Bharucha. However, when the trailer came out, everyone was left stunned to see that it’s actually Ayushmann who is the Dream Girl. So could Ekta Kapoor actually do justice with Ayushmann Khurrana as their ‘Dream Girl’? Let’s read.

The story is about a man named Karamveer Singh who has been playing roles and characters of women since childhood. No, not ordinary women, but women of values and traditions. Be it Sita from Ramlila or Radhe from Krishnalila, Karamveer has done it all. Now one might wonder whether he has been doing that out of his own will. Well, the answer is no. He has been doing it pretty unwillingly, but then what’s worse is that a jobless Karamveer till his mid-20s keeps doing the same and is pretty much anxious about how to proceed with things. So how does he get into the zone of a job? Well, he converts his childhood act into his work, but in the most unexpected manner and place.

Karamveer lands up with a job at a night hotline company, where, needless to say, women talk to desperate and needy men to give them a certain sense of pleasure. Karamveer decides to take up the job. Ultimately, it pays off really well, doesn’t it? In the process, he meets multiple kinds of clients. From a middle-aged drunk cop in the form of Vijay Raaz who needs a voice to hear his inner Gulzar, to a woman in the form of Nidhi Bisht who’s had a heartbreak and hates men to the core, from his own fiancee’s brother Abhishek Banerjee, to his own father Annu Kapoor, everyone seems to fall prey to Karamveer, aka Pooja’s sweet-talking skills and potential. The problem starts when all these men think they have fallen in love with Pooja and they simply can’t do without her. In fact, there comes a stage when Ayushmann is literally forced to compare his situation with the Draupadi of Mahabharata. However, the reality doesn’t change and the reality is the fact that Karamveer is actually dearly in love with Mahi, played by Nushrat Bharucha, but faces all kinds of struggles to first come out of his ‘Pooja’ mode to get to even think of having a future with Mahi.

Ayushmann has been having a fantastic time since the last few years and Dream Girl can easily be considered his 6th straight hit in a row. Each and every time you hear Ayushmann speaking in the voice of Pooja, you are genuinely forced to wonder that it’s actually a man enacting the voice of a female and this perfectly. But that’s what makes Mr. National Award not just the Jack of all trades but also the master of all, right? Dream Girl ought to strengthen Ayushmann’s position in the industry where he will easily be the first go-to person whenever it comes to any quirky and out of the box subject. Director Raaj Shandilyaa is one of those directors who manages to get it right with a big star cast and production in his very first venture. Be it the amazing punchlines or the superb dialogues and the screenplay, Raaj has managed to get the best out of Ayushmann in this one.

Nushrat Bharucha, whom we have always seen as the Pyaar Ka Punchnama girl, has been shown in a different avatar. She manages to get enough screen time and performance potential to prove her might and manages to do a great job in the process.

The supporting cast in the form of Vijay Raaz, Manjot Singh, Abhishek Banerjee have truly been taken in the project due to their acting skills and they don’t fail to deliver with their amazing comic liners and funny screenplay moments. The expressions are in alignment with the dialogues and the screenplay definitely helps the process.

The music of the film too is a winner. From ‘Radhe Radhe’ to ‘Dhagala Lagili Kala’ to ‘Dil Ka Telephone’ and ‘Gat Gat’, every song is a pleasure to the ears and the recreated version of Dhagala Lagili Kala in the movie featuring our one and only Marathi ‘bhau’ Riteish Deshmukh is definitely a cherry on top.

IWMBuzz Verdict: Overall, Dream Girl manages to get out the best, and most importantly, unexplored side of Ayushmann Khurrana which was very important for the audience to see the immense versatility of this very fine actor. There are dull and dumb moments in the movie, but very few, and the good part overpowers the dumb part. Mainly, just the joy of seeing Ayushmann in Pooja’s form is ultimate, and Nushrat Bharucha does her best to fit into the scheme of things. Overall, a must-watch when it comes to entertainment, and if you are an Ayushmann fan, don’t blame us if you simply go bonkers after seeing your favorite’s expertise in the art of cinematic performance.