Who do you think is sexier according to you? Angelina Jolie or Rihanna?

Angelina Jolie, an American actress and filmmaker in one of the sexiest people alive. She was seen in the movie Gia (1998), where she played the role of an upcoming fashion model. Her looks from this movie made the audience left jaw dropped for the first time ever. She always came up with her sassy and sexy looks in the movies, Pushing Tin(1999) Mr. & Mrs. Smith(2005), Alexander(2004), Beowulf(2007) and many more.

Rihanna, a Barbadian songwriter and singer go no less. She is one of the hottest ladies in the pop music industry. Her songs like Diamonds(2012), Umbrella(2007), Work(2016) and so on have always been preppy. Her boldness and hotness in her music videos have attracted her audience and inspired her fans. The most interesting part about her is that she believes that all women deserve to feel sexy, which she stated in one of her interviews at her Savage X Fenty runway show.

Comparing both the beauties and judging who is sexier would be really a tough job. Both are beautiful and sexy in their own way.

Who do you think is sexier? 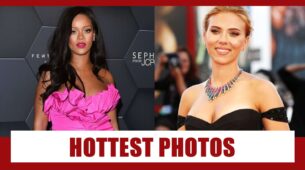