Indian Cricket squad is not a team but a family. They have celebrated each other's birthdays with so much fun. Check them out! Indian Cricket team members share a really strong bond when they are together. They look like a family, more than being a team. They have each other’s back. The team members, from MS Dhoni to Yuzvendra Chahal, everyone’s birthday has been made memorable, especially when they were on a tour for a match. The birthdays of the teammates are celebrated with full enjoyment and enthusiasm. Here are some of the fun moments of the India squad members on their birthdays.

MS Dhoni: The ex-captain’s birthday has been a huge thing for the squad. The whole team celebrated his birthday on 7th July, after defeating West Indies in the fifth ODI in 2017. Everyone applauded for him and wished him good luck. But, after that whole team smashed the cake on his face which was really hilarious. Many of his teammates, including him, posted the picture on social media, which went viral.

Virat Kohli: The whole team celebrated his 29th birthday grandly after the 2nd T20 match 2017, in Rajkot. The teammates smeared the cake on his face and all over his body. It was so fun to see them enjoying the moment. The videos of the celebration went quite viral and fans loved it.

Yuzvendra Chahal: The Indian leg-spinner had a massive celebration when he was held back, so he couldn’t move. Then all his teammates wiped him with the cake. Undoubtedly, the player is loved by his teammates. Even Virender Sehwag, a former Cricketer posted a picture of him with the caption, “Happy Birthday @yuzi_chahal. Isi Attitude ke paise hain, baaki sab ek jaise hain”. The picture later went viral on the Internet, during the world cup. 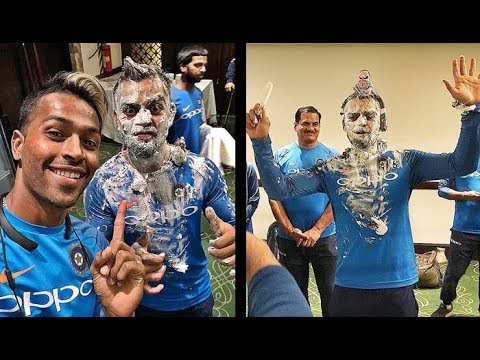