Who is a better wicket-keeper batsman? Check it out! The right-handed Indian batsman, KL Rahul has been a great opener for the matches. He is also an amazing wicketkeeper. The player has a batting average of 47.6 in ODIs, 45.6 and 34.6 in Tests. His consistency and stability in batting have made him a brilliant player. Rahul’s batting skills and strategies are marvelous and can never be doubted. He is one of the players whose talent has proven himself in front of the whole world. He is one of the outstanding players in the Indian Cricket squad.

On the other hand, although Rishabh Pant is a newbie in the Indian Cricket team, still he has made his name with his stunning skills. He is one of the best emerging players in international cricket. The player is an amazing left-handed batsman and a wicketkeeper who has made his first debut in the 2017 T20 series. Rishabh has a batting average of 20.5 in T20s and 38.8 in the Tests. He has received a lot of success in domestic cricket matches like the Indian Premier League (IPL). He has played with the team Delhi Daredevils since 2016.

Both the players are equally great to be compared. Who do you think is a better wicket-keeper batsman for T20s? Let us know in the comment section down below! 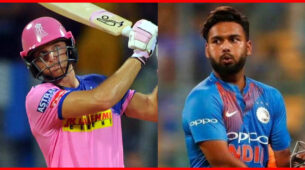