Megha Chakraborty, of Star Plus show Krishna Chali London, accepts that fans were miffed with the creative decision to bump off Radhe’s (Gaurav Sareen) character and bring in Veer (Karan Vohra).

“Many wrote to me protesting my character Krishna not marrying Radhe. I understand their anger for they loved our jodi, but then they too need to get the fact that I am just an artist doing my job. The entire cast, especially the Shukla clan, was sad with Gaurav’s exit. But I guess sometimes you need to bring about shocking twists just to take the story forward.”

Between Gaurav and Karan, personally Megha was more pally with the former. “Being of similar age, we would have lots of masti off screen. The latter, on the other hand, is older and more reserved, and our equation is more formal.”

Point out fan chatter questioning Karan’s acting calibre and she says, “No, I don’t think he lacks the chops. Rather, Karan is quite committed to the job, doing lots of solo rehearsals as well, to get the scenes right.”

Here Megha also accepts that the numbers of this Saurabh Tewari production have dropped after being stable for a point. “Maybe, the IPL factor is working against us. But I am hopeful that with new drama unfolding, we will soon get back our viewers.”

“All said and done, I am very happy with the growth of my character. Krishna started from being a woolly-headed youngster with medical dreams in her eyes, to someone who gives up on love to be with her family (post the 5-year leap). Poor thing is always blamed for all the wrongdoings. So I got a lot to do as an actor.”

Here Megha suggests that if the writers could taper off the drama a tad, focusing more on the romance and lighter moments with Veer coming back to claim his love, the numbers might rise, as youth always love romance and song sequences.”

“A while back, they did show some lovey-dovey scenes between Krishna and Veer, but then the cops broke up the party very soon.” Was Gaurav Sareen dropped from Krishna Chali London due to tantrum-throwing? - Megha Chakraborty is Unsure 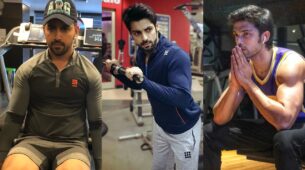