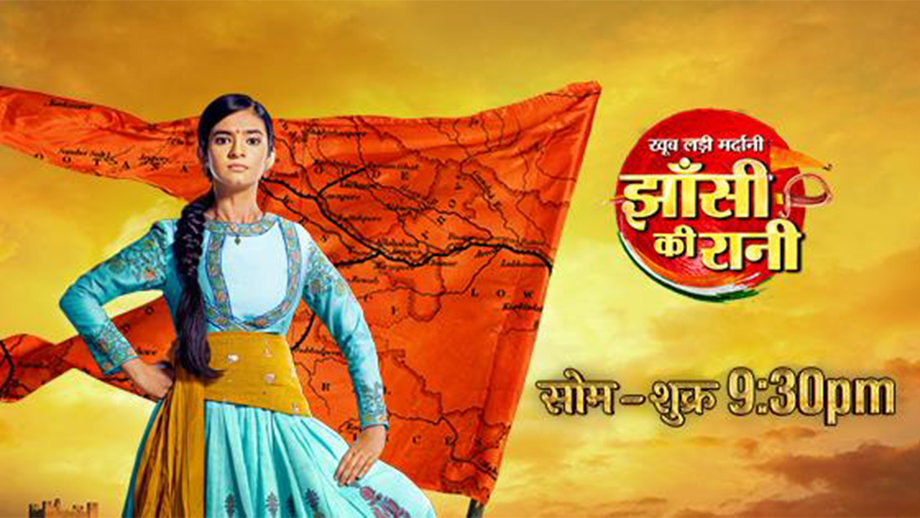 Colors new patriotic show, Khoob Ladi Mardaani — Jhansi Ki Rani, has come at a time of heightened nationalism in the wake of the horrific Pulwama killings.

The setting is Bithur in British India, where the once mighty Maratha empire has been reduced to a vassal state. The quick visual graphic about how the East India Company grew after the Battle of Plassey, to become masters of pan India was well done.

Young Manikarnika (Anushka Sen) is shown to be a very brave girl, who takes part in military exercises on the order of Peshwa Bajirao 2 (Vijay Kashyap) to steal a cannon.  Fighting against a sand clock and the real fire of arrows and huge boulders, she emerges numero uno. She also has the courage to argue with the British in open court, an offence that could end her life. Feeling humiliated by the insult of the British resident who ticks off the Peshwa for having his own army, Manikarnika also removes the company flag to unfurl the Maratha symbol. In a further act of defiance, she converts the English flag into a kite and makes it fly away.

Unknown to her, her father Morpant (Rajesh Shringarpure), a minister in the Peshwa court, covertly runs a revolutionary cell to oppose the Brits. One of his revolutionaries takes part in a covert operation just before his marriage to Manikarnika’s friend. The obviously angry English shoot him dead without a trial, which further angers her. The wedding scene also shows the feminine side of Manikarnika, who looks very pretty in a sari.

On the other side, we have the strong state of Jhansi, ruled by Maharaja Gangadhar Rao (Vikas Manaktala). Unfortunately, as was common back then, his palace is full of intrigue and ambitions. He badly wants a son to prevent the Doctrine of Lapse from absorbing Jhansi into British India. The evil British resident, Ross, conspires with the queen to get the new-born child killed. The mother too dies in childbirth.

In a bid to create melodrama, they show that the crows don’t eat her last rites food, for her dying wish that the king remarry was not being fulfilled. So reluctantly, Gangadhar agrees and instructs his minister, Dixitji, to find him a suitable bride.

In the meantime, the British acquire and burn the land of Jhansi farmers to grow opium. When they march to the palace demanding justice, they are told that it has been green-lit by the king.

Left with no option, they seek refuge in Bithur, where Manikarnika steps in when the border British guards refuse to let them in. She is about to be shot when the Peshwa intervenes, offering to foot the bill of the refugees from his own pension.

Ironically, at the same time, the envoy of Jhansi proposes Manikarnika’s wedding to his king. Morpant declines at first, saying how can I give my daughter to some who oppresses his own subjects? But the Peshwa tells him to look at the strategic possibilities, where she might be able to influence state affairs as queen.

As of now, Manikarnika hates Gangadhar. We wonder how she will agree. Mostly, it will turn out that he was not in the loop regarding the farmers’ eviction. It would really be interesting to see how the romance between a teenaged girl and a 30 year old guy will be shown. Agreed, this was how things happened back then; yet, it might tick off some fans.

This, folks, is the story till now.

We are impressed by the acting of Anushka. She brings out the warrior spirit with elan. All the hard work and training she put in for learning horse riding and sword fighting is finally paying off. This child artist from Devo ka Dev Mahadev has really grown into a beautiful teenager.

Vikas Manaktala is a good actor for sure. If his prior shows had physicality emphasized more, here his distraught and helpless emotions are coming to the fore.

Vijay Kashyap, aka Peshwa, is a very old TV hand; he played Mr Bhattacharya, in India’s first sitcom, back in 1984. Kudos to him for keeping in good health, when many others of his generation have gone way out of shape.

Veteran actor Rajesh Shringarpure is apt as Morpant, caught between love for his daughter and nation.

The story also tries to stress on the state of India at a time when it was divided into warring princely states. As Manikarnika states, we are all the same colour.

Jhansi has opened to decent though not very good ratings. It will quickly need to rise. Sadly, numbers of most new Colors fiction shows are not much to write home about. Chart-busting Fear Factor: Khatron Ke Khiladi is the only silver lining in an otherwise dark cloud for this flagship channel of the Viacom 18 network.

Having said that, Contiloe Films knows the historical genre inside out (Bharat Ka Veer Putra – Maharana Pratap), so are well-equipped to deliver the goods.  Interestingly, they had made another show on Jhansi Ki Rani back in 2009 for Sahara One, which lasted for over 480 episodes.

Also, the current rising anger against Pakistan might lift the numbers of Jhansi, as it appeals to the same nationalistic narrative. Here we must admit that the success of Kangana’s film on the same queen must have made the job easier for the Colors team, for the movie made Manikarnika’s life before she become queen a household affair; so they did not really have to work to establish that angle.

Just one question at the end – as the promos suggest that this show will focus on the teenage years of Manikarnika, will the show take a leap to show her becoming a martyr in the 1857 uprising?