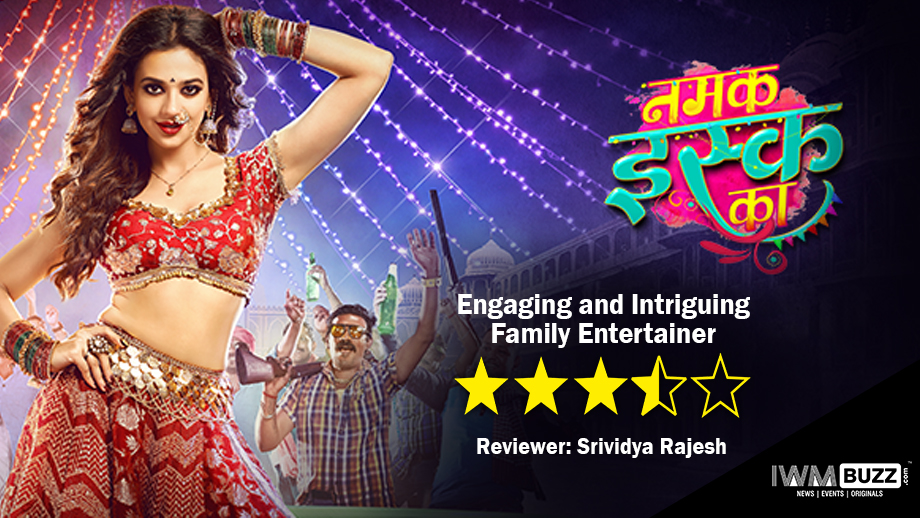 Namak Issk Ka the new Colors show in a nutshell, breaks all the stereotypical formulae used for success in Indian Television. Well, to begin with, we have a boy’s household and a girl’s household that kickstarts any story. The difference that Namak Issk Ka as a show offers is that there is only one big household shown in the show, wherein there are literally two different families living together.

Yes, this uniqueness in itself scores high in the audiences’ minds. And to top it, the storyline has an engaging narrative with a thread of suspense in the form of the past secret that one of the prime characters in the show Iravati aka Badki Didi (Monalisa) holds.

It is rather confusing if you clearly do not understand this unique family tree. Two thick friends Ravikant and Nishikant who are business partners, are the patriarchs of the families. Iravati, the wife of Ravikant is the cunning and scheming woman who breaks this happy friendship into pieces, causing a permanent scar. She not only kills the other family through a car accident, but also permanently dents the health of her own husband who is reduced to living his life in his wheelchair.

Iravati has two daughters Rupa (Rajshri Rani) and Gunjan. Rupa is married to Raunak (Aamir S Khan), the elder son from Nishikant’s family. Yug (Aditya Ojha) the younger son of Nishikant and Saroj (Garima Vikrant Singh) is about to get married to Ravikant’s younger daughter Gunjan.

On the other hand, the leading lady of the show Kahaani (Shruti Sharma) struggles big time to give a good life to her ailing brother Lucky and sister Rani. She is a dancer by profession and has the stage name Chamcham. The best part is that the makers have made the story extremely clear and transparent in its initial few episodes, wherein they have defined and explained that Kahaani is actually the daughter of Ravikant, born to his other wife. Iravati had got the mother and daughter killed, but the daughter has in fact survived to see another dawn.

Amidst Chamcham’s struggles, we see Yug and Chamcham’s tashan. Yug hates the sight of dancers and does not value them. However he is not aware of the fact that Chamcham aka Kahaani is the same girl who was his childhood friend.

The story is pacey, has the power of connecting all dots well. The dialogues are crisp and to the point, which garners all the attention of the viewers watching the show.

Though the viewers know the backstory to Iravati’s ruthless mindset, there is a huge intrigue created on the ‘whys’ and ‘whats’ in the story. The show is given a very different treatment in terms of its look and feel.

The concept maker Gul Khan has been a Producer who has been creating new trends with her shows and concepts. We have to say that this one is indeed interesting. This time around she is joined by the able Co-Producer Dipti Kalwani.

Coming to performances, Shruti Sharma as Chamcham is the best casting possible. She ignites fire with her thumkas, and that’s the power she has in her well-etched character. Aditya Ojha as the rough and tough Yug is in fact like a shell, hard from the inside, but very soft from inside. The actor is playing his role well.

Monalisa aka Antara Biswas as Iravati aka Badki Didi is fabulous. After being the main Daayan in Nazar, she has thrived in this new and challenging role offered to her. She looks glam, and her expressions are on point.

The show which questions society over the possibility of a dancer becoming a daughter-in-law will indeed have a successful journey, engaging the viewers. The best part is that the show has many parallel threads and stories that can become the driving forces as they open up.

Overall, if a viewer is looking for a break from the stereotypical stories, this is one show to watch out for!!