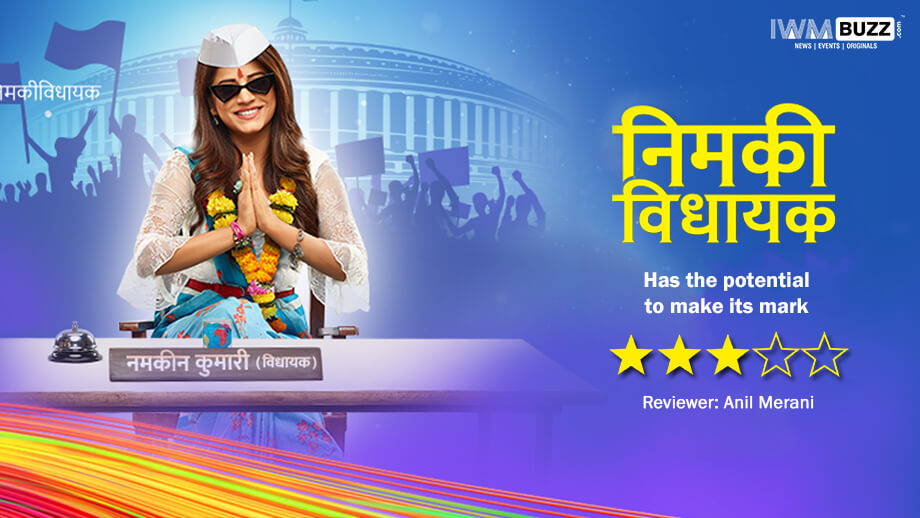 In the era of women’s empowerment, Star Bharat shows like Nimki Vidhayak come as a whiff of fresh air. There have been several shows/films that have tackled hard-core gender politics, but never one dealing with serious social issues in a lighter vein.

Nimki Vidhayak takes up from where its predecessor Nimki Mukhiya ends. In essence, it is the same show, with just a character progression. Nimki (Bhumika Gurung) takes a leap of faith and becomes an MLA from the earlier village head she was. If all goes well, can we expect her to be Nimki CM next season (like Yes Minister and Yes Prime Minister)?

It is good that her character traits have remain unchanged – she is still a child at heart. But yes, she has learnt a lot the hard way. She has to eliminate her opponent, but takes care of her now mentally ill mother.

The opening scene, where a bridegroom cribs about slow travel in a palkhi, was fun. It brought into focus the need to reinterpret customs and traditions in modern times. But then Nimki uses the same palkhi to march into Patna city, which is 15 kilometers way. Sadly, many politicians do pull such stunts to make a splash.

I did not know that new MLAs get bungalows. Does it happen in Bihar? Nimki feels affronted when she is made to stay in the govt guest house. The scene where the help also throws his weight around was indicative of how power/corruption filters down to the lower ranks as well.

Budgetary issues forced Qissago Telefilms not to make. a proper replica of Bihar’s Vidhan Sabha. Nimki’s quip, asking why film star portraits are not adorning the assembly hall, speaks volumes about the current level of political apathy among the youth. Most millennials will not know the leaders of respective states, but yes, will know which actor did which film.

The scene where Nimki makes a hue and cry about oathtaking was funny. She brings in her own lines. But just one thing, how come she does not have a political agent to guide her?

Nimki’s aunt represents the typical Indian woman who likes to know what is happening in their neighbourhood, so she peeks into other MLA’s rooms. Her spat with other distant relatives was a slap on the nepotism prevailing in our political class.

What we really like was Nimki trying to forget her past and wishing to settle down. She is not your prototype all-white bahu.

Not much is seen about the male lead, Mintu Singh (Abhishek Sharma), as he has just entered.

Manish Goel is doing a good job as Nimki’s friend, Abhimanyu Rai, earlier played by Indraniel Sengupta. His wife Sweety (Shriya Jha) is too good to be true. How can she push her husband to his first love (back story)?

Abhimanyu then makes Nimki realize that she might have made a mistake in taking on a big leader in her public fight for her above pad. The show also reveals how media plays its own TRP game by letting matters fester.

Any daily show is incomplete without family drama, so the clash between Nimki and her sister Mahua (Saniya Noorain) makes for good conflict. The latter is scared of Nimki’s rise and it takes her guy Tunnye to show her the mirror. We wonder if Nimki’s family woes will overshadow her political journey.

Bhumika is doing a good job as Nimki, but at times, we do feel she overacts. But then, that is the requirement of the script. I wonder how many days a month is she shooting, being in every other scene.

Hope the narrative opens up and other characters too get their due, for now it is only Nimki all the way, which is getting a tad boring.

We also wish that down the road, the show also deals with real burning issues that women of the hinterland face. Agreed, you will need to show Nimki’s lighter side (which is the character’s USP), but writer-producer Zama Habib is a past master, so we hope he walks this delicate path.

One thing that I am not too comfortable with is the total use of regional dialects in hinterland-based content. Not everybody gets Bhojpuri. Are you not restricting your own audience base?

Last but not the least, I would have been very happy had the makers had the gumption to comment on contemporary political realities of Bihar. But we know that would not happen, given how apolitical GEC TV is.

3/5 is our rating for Nimki Vidhayak.