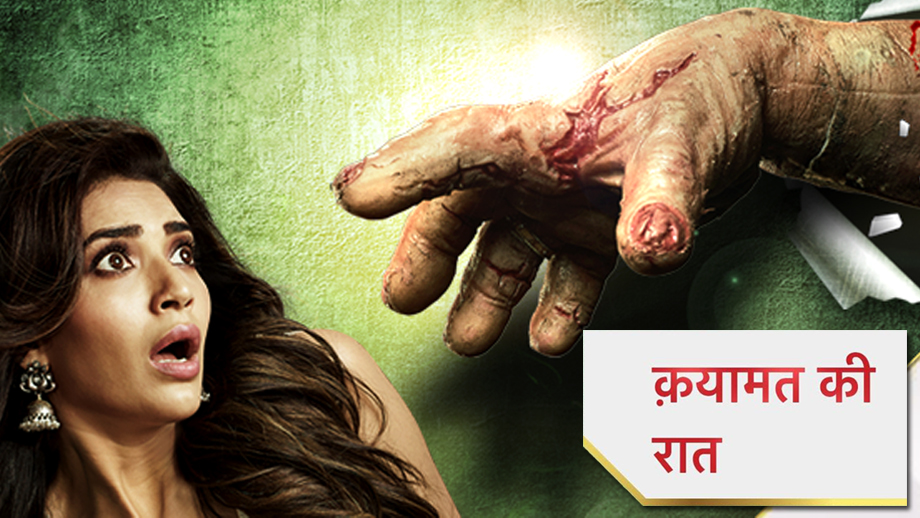 Star Plus, which of late, has been seeing bad tidings, has turned to none other than Ekta Kapoor, to again change its fortunes, just like when she had made this channel number one, courtesy her K-bandwagon shows, back in 2000.

It is against this backdrop that Balaji Telefilms has unveiled its latest weekend Star Plus horror saga, Qayamat Ki Raat. Taantrik Kaalasur (Nirbhay Wadhwa) covets the newlywed Suhasini (Dipika Kakar) in a bid to achieve complete immortality; but she cuts his body into three pieces, scattering them all over.

Before getting chopped off, he curses her that no girl from her family will survive suhaag raat (first night).

Cut to 25 years later; her two grown-up daughters, Gauri (Karishma Tanna) and Karuna (Daljeet Kaur), return to Raamnaamgarh in a bid to check out a groom for Karuna, suggested by her dad (Abhinav Kohli). Karuna makes up her mind to decline Aman (Manraj Singh), even before meeting him.

As it happens, Aman and his best friend, Rajvardhan Prithvi Singh (Vivek Dahiya), bump into Gauri and Karuna and have typical nok-jhok, which extends to the Raamnaamgarh train journey and all four get stranded on the way.

The station manager asks them to wait till the next day, for it is not safe to travel to Raamnaamgarh, as that cursed temple (where Suhasini was kidnapped by Kaalasur before fleeing for safety) falls enroute. But the modern foursome doesn’t agree and proceeds on foot.

On the way, Karuna slips into quick sand where Kaalasur’s hand was dumped back in 1993; she again activates him. The others quickly rescue Karuna, but as she has badly sprained her foot, and it is raining heavily, they break into the above locked mandir for shelter. Meanwhile, Kaalasur’s hand starts to communicate with his head, which directs it to first join all his three parts (hand, head and torso).

Meanwhile, the driver, who had first got Suhasini and her husband to the temple under Kaalasur’s orders, gets into a fight with the boys under the pressure of Kaalasur’s hand. He had been locked in for 25 years.

Soon help reaches, and the by-now-mentally-deranged driver is captured. The villagers first plan to burn him and hidden Kaalasur’s hand. Had that happened, the danger would have been over.

But both the couples, and Raaj’s father, Manish Khanna, who does not believe in the supernatural, save him.

Meanwhile, the other hand reaches the mansion and tries to force one family lady, who provides comic relief, for some information.

In the meantime, Karuna and Aman start to develop feelings for each other, although both claim not to be interested. This is the story so far.

Kudos to Nirbhay Wadhwa for accepting such a role wherein he has to go beyond his look and physique and display a performance with his spine-chilling Tantrik avatar.  While we quite like the scary makeup and sound, Karishma tad over-stretches her cool girl act. Ekta always rewards old Balaji hands with more work; Karishma was part of Kyunki Saas Bhi Kabhi Bahu Thi for five years. She has also done Kkusum, Kkoi Dil Mein Hai and others, for Balaji.

Ekta has also given a second chance to Divyanka Tripathi’s husband. Vivek had earlier been the lead of another Balaji supernatural show, Kavach…Kaali Shaktiyon Se, which was an average rating show. We reserve our comments on his acting, till the show really opens up. Raj and Gauri’s romance will obviously occupy a very important stage in the show.

The uber-talented and good-looking Daljiet Kaur (Deepa) is also doing a good job as the elder sister. This show can give Daljeet’s career a fresh impetus. Normally, girls of her age have to be content playing mother.

Just one thing, Karuna, who was supposed to have sprained her foot after the above accident, suddenly becomes alright; Kaalasur’s magic?

We still don’t know how her mother Suhasini died. The girls were brought up by a loving stepmom. Apara Mehta plays the dadi, who is very scared of the curse and was against sending the girls to Raamnaangarh in the first place.

There are enough thrills and chills in the first two episodes to indicate a strong horror template, down the road.

Interestingly, Ekta is facing competition from her own Colors show, Naagiin, which has once again got a superb opening. So Star must be hoping for a big ticket opening, here as well.

Qayamat Ki Raat bodes well, as they have ticked all the right boxes, i.e. good old horror, and great-looking faces.

Till now, most of the channel’s weekend fiction, offering Airlines, Gulmohar Grand, Aarambh, and last but not the least, Khichdi 2, were not your normal staple. Hence, none even registered on the ratings. Few of them were taken off-air even before their stipulated runs ended.

Star must be praying that Kaalasur wreaks havoc on the TRP charts as well.

We at IWMBuzz.com credit Qayamat Ki Raat 3.5 out of 5 stars.