Bigg Boss 13 contestant Paras Chhabra, who is currently in yet another reality show titled Mujhse Shaadi Karoge, will make a flabbergasted statement.

Well, as we reported yesterday, Jay and Mahhi will enter the house to help Shehnaaz and Paras. Soon, they would ask Paras ‘what type of girl he would want to get married to?’

Paras will say that he wants a girl, who will love him like his mother.

Later, Jay will tell him that Sanjana loves him. However, he would refuse and tell that mentally they don’t connect with each other. He would also compare her with his ex-Akanksha Puri. He would mention that Sanjana is Akanksha’s copy.

Akanksha, are you listening? 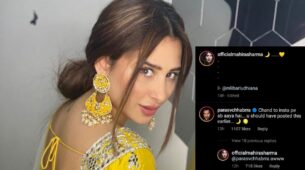