He says, “We are venturing into this genre, so it is exciting. The writing is different in this genre. It is interesting to explore and work on this genre. Tantra can’t be compared with supernatural dramas of Indian television as it doesn’t have ghost, chudail, daayan. Tantra is not based on those lines. The daily truly shows that doing black magic isn’t good and the consequences can be dire. I agree it comes in supernatural genre but like every love story is not the same. This is also not similar to any supernatural drama.”

Commenting on working with Juhi Parmar again, he shares, “Juhi is a committed actor. She plays any character with her heart and soul and gives her 100%. She gets involved in any character that she plays. Although she is a friend, she fits the role and hence I offered her the role. She agreed to do the show; I am very happy.”

Writer, director and producer Siddharth Kumar Tewary is overwhelmed with RadhaKrishn’s success. Talking about the same, he avers, “I am immensely overjoyed with the success of RadhaKrishn. The entire team at Swastik is overwhelmed with the response on the show as we have put all our energies to make the series. I have not received any negative feedback on the show. We are very happy but at the same time responsible, so that we don’t let down the expectation of the viewers. The show has completed 50 episodes and it’s just the beginning.”

Finally, he adds, “I really hope audience watch Tantra. It has a strong message. If you do black magic it will come back on you and you won’t be saved from the consequences.” 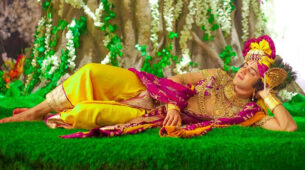