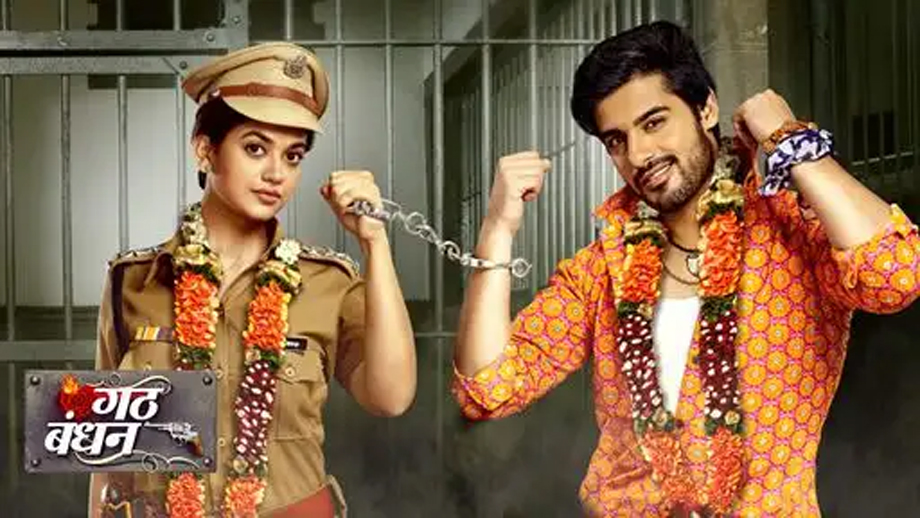 Just think about it – what drama will happen in a house where mother and son are extorting criminals, while the bahu is an honest, upright cop? Well, this in a nutshell is the plot of the new Jai and Kinnari Mehtaa produced Colors show, Gathbandhan, starring Shruthi Sharma (Dhanak) and Abrar Qazi (Raghu).

Interestingly, while most TV plots shy away from addressing inter-caste relationships, here Dhanak is a Gujarati and Raghu is a tapori Maharashtrian. Will the creative focus on this issue or play it safe, preferring to harp on the tried and tested chor-police story? Only time will tell.

The show opens with Gujarat-based Dhanak single-handedly taking up the responsibilities of her younger sister’s marriage. Tsk, tsk, they missed the opportunity of drumming up some drama on how a younger sister could get married with the older sister still sitting at home.

IPS trainee Dhanak also teaches some roadside Romeos a lesson. Being a cop story, for once the men in khakhi also arrive on time. She also aces the Gujarat police course by successfully tackling dummy terrorists in a mock operation.

On the other side across state lines, we have the local underworld queen awaiting the return of her jailed son, Raghu. Mai (Sonali Naik) comes across as a very colourful cop-hating lady who also likes to joke a lot. It is her dream that Raghu marries Maya (Pragati Chourasiya), but alas, he does not dig her.

The creative smartly used the Mumbai seafront running parallel to the iconic Worli-Bandra Sea Link for Raghu’s homecoming, to add cinematic largeness to the narrative.

Raghu is also shown to be a bad guy with a good heart, for he never kills or hurts anyone. In an attempt to find out who snitched on him, causing him to be jailed, he scares a fellow goon to squeal the name of Gujarat-based Mahendra Parekh, whose calling card turns out to be identical to Dhanak’s father’s (Rajeev Kumar) calling card. Shakespeare uncle had said, what’s in a name after all.

A revenge-seeking Raghu then kidnaps Dhanak’s father only to let him go when he realizes that he’s got the wrong man. In the process, he also flips head over heels for Dhanak.

Meanwhile, Dhanak is forced to call off her sister’s wedding, seeing how dowry-hungry the groom’s side is. But all this has a price, for Dhanak and her indebted father are forced to leave their home state and seek shelter in Mumbai.

We have always wondered at how commonly coincidences happen in TV. In a huge sprawling megapolis, Dhanak and family have to land up in Raghu’s chawl, courtesy her nani.

Normally, sparks fly between the male and female leads, but here there is hate chemistry between Mai and Dhanak. The latter walks in on Mai’s fun game when she was pelting another lady with tomatoes.

Mai insults her for getting in her way and Dhanak also gives her back.

Mai then asks Raghu to befriend Dhanak and help her score one over her. She then burns Dhanak’s late mom’s sari and the latter vows to make her repent her actions.

Meanwhile, Dhanak passes the Mumbai police test on Raghu’s encouragement. It is quite silly that he does not come to know of her cop aspirations. Also, I wonder at his gall of stealing a cop’s revolver outside the police headquarters.

As of now, Dhanak hates Raghu, but as it happens, love will bloom and subsequently, marriage. All hell will break loose when she will end up marrying Raghu. Mai will come down on her like a ton of bricks. Dhanak will face Maya’s jealousy as well.

Both Shruti and Abrar, who are new to Hindi TV, are doing a good job. The latter looks smart in his action costumes.

If someone really stands out in all this, it is Sonali Naik as Mai. She is doing a superb job as the underworld queen. There will surely be a back-story involving her dead husband, as to why she hates cops. Rajeev Kumar is apt as the crying father. Hope a day comes when the good father characters also have greyish layers, which would only make them appear more human. Wish there were more scenes with his MIL, with whom he was supposed to have huge difference of opinions.

Also, expect some romance between Dhanak’s sister and Raghu’s pickpocket friend. The scene where Rajeev asks the latter to get his daughter a computer job and he thinks that she too wants to join his profession was funny.

Of late, Colors has gone through a bad patch ratings-wise. Bigg Boss, and its follow-up shows (Tantra and Sitaara) did not rate. Sadly, Gathbandhan and Kesari Nandan have opened up with average numbers.

But there is hope for Gathbandhan, for its real story is yet to open up. And this show has all that the doctor has ordered, i.e. larger than life characters and canvas, something similar to Madhubala, which had set the charts ablaze a few years back. The use of the local lingo also adds to the authenticity of the plot.

IWMBuzz.com credits Gathbandhan with 4 out of 5 stars.