The Zee TV show produced by Bodhi Tree Entertainment (Sukesh Motwani and Mautik Tolia) will take the story of Sahil (Karan Jotwani) and Vedika (Suhasi Dhami) into a new zone, that will head in to show a past life regression where an astrologer will help Sahil know that not only in the current life but in past as well their love could not meet the fate.

The movie has some breath-taking moments, shot on a large scale.

When contacted, Producer Sukesh Motwani told us about the Maha Movie stating, “It’s a stunning visual spectacle that transports the cast of Aapke Aa Jane Se into a period almost two centuries back .. and delves into the pain, passion, pathos to do with the great tragic, but intensely pure love story of Sahil and Vedika in an exotic world of kings, queens, palaces, magic, cloak and dagger games! It’s an experiment where a cast of a show based in a contemporary period is transported back into another era! “.

Truly, a first of its kind experience in fiction narrative on television.

Are you ready to get transported into the past this weekend along with Sahil and Vedika? Drop in your comments here. 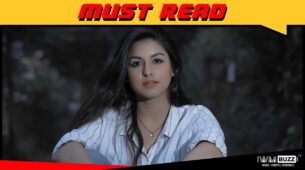