Choti Sarrdaarni will see Sarabjit and Meher getting into a romantic moment in the coming episodes. Sarabjit and Meher who have been respecting each other a lot had found love for each other when this problem erupted of Rana (Abhianshu Vohra) and Ginnie being in love.

Well, with Sarabjit and Meher having differences over the issue, there has been a lack of the cute scenes between them for a while.

However, that will be taken care of in the coming episodes when Sarab and Meher will be caught in yet another unavoidable situation wherein they will get close to each other and will shower that love and closeness that they have for each other.

As per a reliable source, “Meher has been trying to get evidence against the Sandhus and she dressed up as a waiter to get the same. However, she fell into trouble and Sarab has been there to rescue her.”

In one upcoming sequence, Meher and Sarabjit will be in a hiding spot when Meher will try to close Sarab’s mouth when he will start talking, being unaware of them being followed by Paddy’s goons.

This will be a moment to cherish as Sarab will go on looking at Meher’s worried yet beautiful face, while Meher’s hand will be on Sarab’s lip.

Will Sarab and Meher join hands to rescue Ginnie? 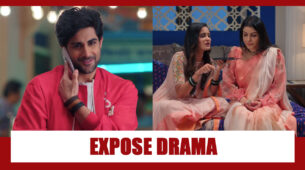