As we reported earlier, Sarla calls up Preeta and asks her to prepare her first rasoi for the Luthra Family and make something sweet. Sherlyn and Mahira find out Preeta’s plan for the first rasoi and decide to ruin it. Sherlyn distracts Preeta with the help of Girish. When Preeta is away they mix red chilli powder in the gajar ka halwa which she has prepared.

Now, in the coming episode, Mahira also prepares her own halwa and challenges Preeta to see which one tastes better. When the Luthras taste Preeta’s dish they love it but they get shocked by Mahira’s spicy halwa recipe. Sherlyn and Mahira get shocked as their plan ended up backfiring on them.

Later, Preeta tells Mahira and Sherlyn that she has a rightful place in the house and she will do anything to defend it. She promises to spoil their every evil plan.

Are you excited to see the drama? 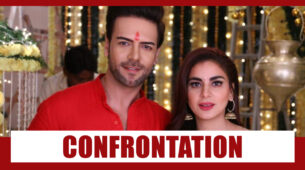