Colors’ popular show Udann (Guroudev Bhalla and Dhaval Gada) has been entertaining audiences with its new dose of drama everyweek.

The ongoing track has seen how Imli (Vidhi Pandya) and Ranvijay (Vikas Bhalla) have fooled the villagers in going to the free medical camps, only to lose their organs.

Now in the upcoming track Sooraj (Vijayendra Kumeria) will bear the brunt of Imli and Ranvijay’s anger when he will be ordered by them to whip himself.

Yes, Chakor (Meera Deosthale) will save the lorry which would contain the organs taken from villagers’ bodies. She will go on to donate them to a good cause.

Imli and Ranvijay will not be able to digest this failure and will decide to punish Sooraj in order to hurt Chakor.

A source says, “It will be an emotional scene wherein Sooraj will be asked to whip himself standing in front of the entire village. Seeing Sooraj in pain, Chakor will try to stop him by coming in line to the whip. However Sooraj will continue to hit himself as a result of which Chakor will also be whipped by Sooraj.”

How will Chakor put an end to Sooraj’s agony and pain? 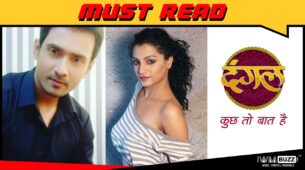