The rain sequence of Karan and Preeta from Kundali Bhagya will make you romance in rain too! We all have come across various hot moments of Karan and Preeta from Kundali Bhagya but we promise you it will be different this time. Right from hating each other from the bottom of the heart to fighting for and with each other, the journey of Karan and Preeta was one of the best journeys seen in the showbiz so far.

Kundali Bhagya was first seen around the three characters from the Luthra Family. One played by Dheeraj Dhoopar as The Karan Luthra, second his on-screen elder brother Rishabh Luthra played by Manit Joura, and their love interest Shraddha Arya as Preeta Arora. But the love triangle was no more a complication after Rishabh married Sherlyn Khurana played by Ruhi Chaturvedi.

The romance we are talking about started with Karan and Preeta’s cold war. Karan says Preeta that he is not a kid that she is holding his hand to which Preeta said she knows that Karan is not a kid and grown-up to understand and listen to her. It started thundering and raining outside and Preeta says that they should close the windows. Just when Karan was about to change his wet t-shirt, he notices that Preeta is not able to reach the window so he goes close to her and grabs the window which had Preeta’s hand and pulls towards him. Later, they both shared some hot and wet moments and gave us more reason to drool upon them.

Now check out what we said! 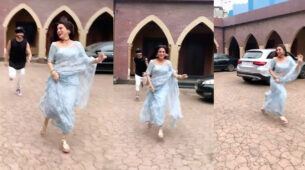