Ek Bhram Sarvagun Sampanna 8 May 2019 Written Update of today’s episode we see how Kabir gets stuck in his vest while changing that Kavya helps him get out of it. They share a moment. Today’s Ek Bhram Sarvagun Sampanna 8 May episode begins with Dhruv thinking about Jhanvi. Jhanvi talks to herself and calls Dhruv stupid for loving and trusting her. In her sleepiness, Jhanvi spills water on Kabir. While changing his vest, Kabir gets stuck. Kavya (Tanvi Dogra) helps him in removing the vest. The two stare at each other.

In the morning, Jhanvi (Shrenu Parikh) recalls Amma’s words while doing her morning exercise. Dhruv comes to her and praises her. A person comes to Jhanvi and gives her the medicines of Suman. Some time back, Jhanvi calls the doctor and asks him to change Suman’s medicines as her health is getting better. Presently, Jhanvi feeds Suman the medicines which are worsening her mental condition.

The Commissioner advises Prem to organize a press conference at Mittal house. Jhanvi and Dhruv support the Commissioner. Jhanvi says we need Kavya’s help to clean his image in front of the public.

The Army officer calls Kabir and asks him to think over again about some deal. Kabir recalls his past where he was on a mission. Some time back, Kabir learns about Vyom being involved with the terrorist. The terrorists shoot Kabir but Vyom takes the bullet on his body.

Vyom takes Kabir’s promise not to reveal his truth ever. Presently, Kavya asks Jhanvi if she can take the responsibility of giving medicines to Suman. The written update of 8 May 2019 Ek Bhram Sarvagun Sampanna episode full story ends here. 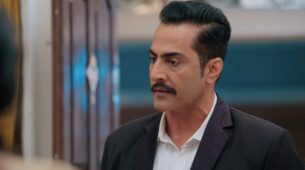