The Kapil Sharma Show 16 June 2019 Written Update of today’s episode we see Anupam Kher and Esha Gupta came on the show to promote their new film ‘One Day’ and Anupam kher is seen having some fun with Archana Puran Singh. 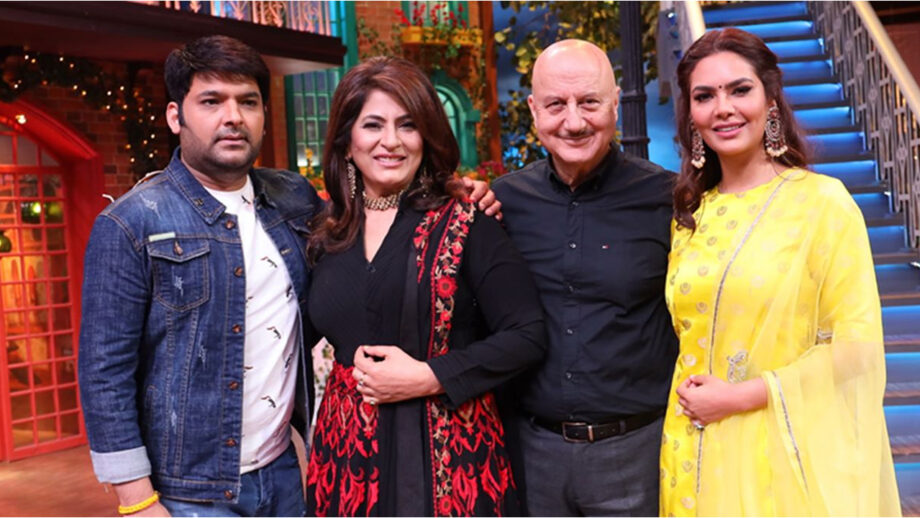 The Kapil Sharma Show 8 June episode today we see Anupam Kher sharing a special moment with Archana Puran Singh. The two starred together in Kuch Kuch Hota Hai, and were reliving their days as Mr Malhotra and Miss Braganza. The veteran star talked about working in the international series New Amsterdam.

Gathering courage one day, he decided to confess his feelings to her. But before he could, the girl asked him to pronounce her name correctly Archana Puran Singh recalled the memories of one of her earlier film Ladaai which also featured Anupam Kher, Mithun Chakraborty , Rekha and Dimple Kapadia.

She shared that there was a kissing sequence for Anupam and Archana in the film. Nervous before shooting her first on-screen kiss, she had called the director to share her inhibition. To her surprise the kissing scene was removed from the script. She was later surprised to know that it was Anupam who asked the director to take the scene out, citing Archana’s nervousness. The actors shared that they haven’t shot for an onscreen kiss till date. Kapil Sharma asked the actors, if they had to change anything from their lives, what that would be.

Giving it a deep thought, Kher replied that as a kid, he was an average student and was not even inclined towards sports. Although he doesn’t regret anything, given a chance he would go back in life and alter his interests as a kid. Esha Gupta on her part said that she focused on becoming a lawyer and then shifted base to acting. So if she could, she would have rather invested more time in acting. Anupam Kher revealed that when he came to Mumbai, he had no money and used to sleep at railway stations.

Since he wasn’t very good looking, he did not even get work for three years. He shared that when he met Mahesh Bhatt, the filmmaker agreed to give him work as he had heard that Kher was a good actor. Anupam had then told him that he was not good but a brilliant actor. His confidence got him his first film Saransh. Kher took the opportunity to announce his autobiography Lessons Learnt from Life Unknowingly on The Kapil Sharma Show stage. The written update of 16 June 2019 The Kapil Sharma Show episode full story ends here.