Kundali Bhagya 2 May 2019 Written Update of today’s episode we see how Prithvi pays off two people who look a lot similar to him and Sherlyn, and he asks them to take their place at the party instead. 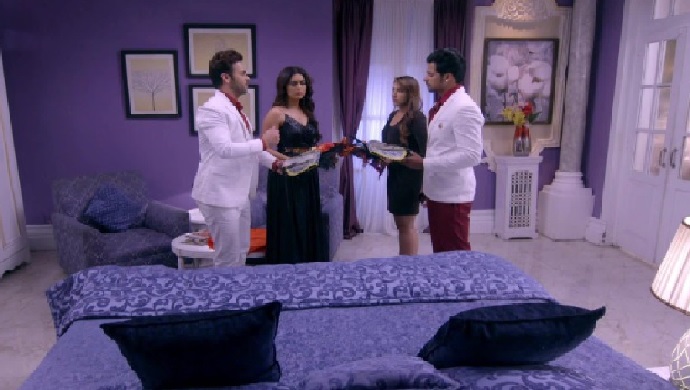 Today’s Kundali Bhagya 2 May episode begins with Prithvi (Sanjay Gagnani) finding Preeta (Shraddha Arya) while he is looking for Sherlyn (Ruhi Chaturvedi). He compliments Preeta on her look. Karan (Dheeraj Dhoopar) shows up behind Preeta. He begins asking Prithvi questions about his absence.

She says the way they were fighting looked liked they knew each other very well. Karan becomes impatient and decides to call up Sammy and Srishti to find out about the truth injection. Sammy and Srishti are back in the car and driving after treating each other’s wounds. Sammy tells Karan that Srishti got into a small accident. Prithvi is standing nearby and hears that Srishti got in an accident.

Karan demands that Srishti go to the hospital before coming home. Prithvi gives similar clothes to the two people who look like him and Sherlyn. Then he decides to explain his plan to Sherlyn. Sarla aunty has reached the Luthra house by then. Prithvi’s goons call him up to warn him. The written update of 2 May 2019 Kundali Bhagya episode full story ends here.