Yogita Bihani who is seen in ALTBalaji’s Dil Hi Toh Hai gets into a conversation with IWMBuzz.com. Yogita Bihani who has made a superb debut with Ekta Kapoor’s Dil Hi Toh Hai, first on Sony and then on ALTBalaji, refused to comment on its much talked about upcoming third season.

Says Yogita, “I’d rather talk about its very enjoyable earlier avatar. Since the format moved from TV to web, the shooting techniques and required acting styles underwent a major change, meaning that I had to unlearn a lot of what I had picked up in the short time that Dil Hi Toh Hai aired on Sony. But I am glad that I was able to rise up to the challenge. My acting has definitely gotten better, for many fans who saw only Season 2 have told me that they plan to check out the first season as well.”

“The best part was that I got a chance to play different characters in Season 2. Also, in web, unlike on TV, the entire story is crafted before we go on the floor, thus giving us more prep time,” she adds.

“The tube is restricted in terms of what we can do, given the audience profile. Having said that, TV gives you a much wider arc; since you are seen daily, you are in a better position to influence the audiences,” sums up about the TV vs web equation.

Being a smart actor, Yogita did not refuse to play a mother on screen, although she is just 23. “This just gave me a chance to showcase another facet of my acting skills.”

After playing the sweet girl next door character, Yogita next would want to play the lead in a hard core patriotic action flick. “I want to dabble in more complex and greyish characters as well.”

When asked about the sex and sleaze rampant on WWW, she says, “That does not mean web only has those kinds of shows. I was just bowled over by Netflix’s Delhi Crime (based on Nirbhaya case). Similarly, ALTBalaji’s Baarish is a simple love story. Web offers a bouquet of different types of content, so you can pick and choose what you like.”

Although Yogita is not comfortable kissing on screen, she would consider it if the character justifies it. “Sadly, many makers fill their content with sex and nudity just to win eyeballs.”

Dresses in which I can flaunt my legs makes me feel sexy: Dil Hi Toh Hai actress Yogita Bihani 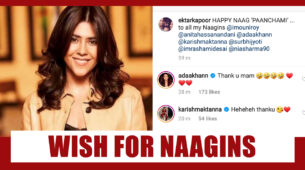