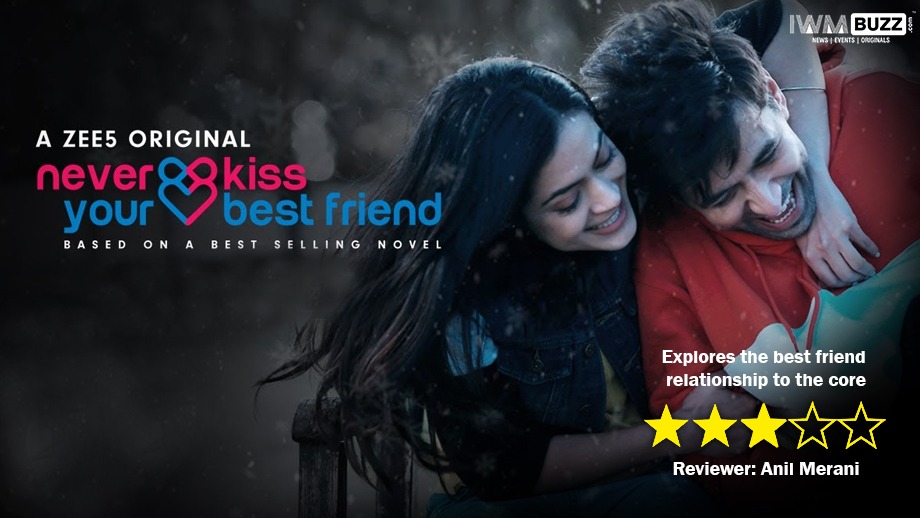 The concept of Friendship vs Love has spawned many a films. Now even the web is chugging along the same lines, courtesy the new ZEE5 romcom Never Kiss Your Best Friend starring Nakkul Mehta and Anya Singh.

The series is an adaptation from author Sumrit Shahi’s book and this is surely a good watch. However, the story has gone through many changes and is not exactly the same as read in the novel.

The web budgets have surely gone sky-high; no wonder the unit can shoot in Old Blighty.

The storyline is interesting about how two friends Sumer Singh (Nakkul) and Tanie Brar (Anya Singh) stand for each other without really falling in love (we watched till episode 6). They even let the other shack up with their partners at their respective pads.

The backstory of both is also dealt with. Niki Aneja standouts as Anya’s overbearing, yet loving Punjabi mother (pub scene). So far Rituraj Singh (Sumer’s over imposing dad) hardly has any views.V ivek Mushran too does not have a good screen space till now as Tanie’s dad.

Even Suchitra Krishnamoorthi, does not have much to do. But her straight-talking to son Sumer, when she caught Tanie snuggling in with her boyfriend, was fun.

The first scene of Sumer and Tanie meeting in the loo was unique. Here we feel that in an attempt to win over Nakuul’s huge TV fan base, the makers (Inglorious films) have held themselves back. Why was it needed to show Tanie as the good girl? Many girls today have multiple partners and are not judged for the same.

Tanie’s constant talking to the audience keeps us more in the loop with the action. Good that the writers did make her bold enough to pass sexual jokes. Guess, this was needed to appease the online audience. Sumer also liberally uses cuss words.

The scene when Anya vandalizes her guy’s car on finding out his infidelity, brought a smile to our faces. Moral of the story is never mess with a gal.

Must say, Nakkul has done an excellent job in both periods (college and later). Life has got to him as age passes. Sadly, they did not show him maturing though, which completes an individual.

Sometimes the constant jumping between college to older times becomes jarring, and it takes a bit to understand what and why.

We were very impressed by Nakuul’s college boy look. At 37, it must have taken a toll to get the physically laid back attitude. He also brings out the bad boy image with élan. I hope now some maker gives him darker nuanced roles as well.

Anya’s character is more author-backed. But yes, she adds a lot of natural poise to the role.

We are sure this show will give more mileage to her when compared to her B-Town debut Qaidi Band which came and went unsung.

Our biggest problem is that given the impatient web nature, the plot meanders around a lot. We did not get to the crux of the story till episode 6, and that might be a dampener.Having said this, the chemistry between Nakuul and Anya is quite engaging and we love to see them together.

The fun banter and the friendly talk that Sumer and Tanie indulge in is heart-warming. The plot reminded me of Saif Ali Khan’s breezy rom-co Hum Tum.

Among the other supporting cast, Rehaan Khan did good as Anya’s guy Rehaan and the sexy Laika (Palloma Monnapa) was good to watch.

The background score was good and catchy and kept the momentum going. Jaane Na Dunga Kahin by Armaan Malik and Jee Na Paunga by Vishal Mishra mesmerizes us. Shooting in England also raises the cinematographic value of the narrative.

IWMBuzz.com credits ZEE5’s Never Kiss Your Best Friend with 3 stars out of 5. [In Pic] Krystle Dsouza is sexy in red, Nakuul Mehta feels the heat