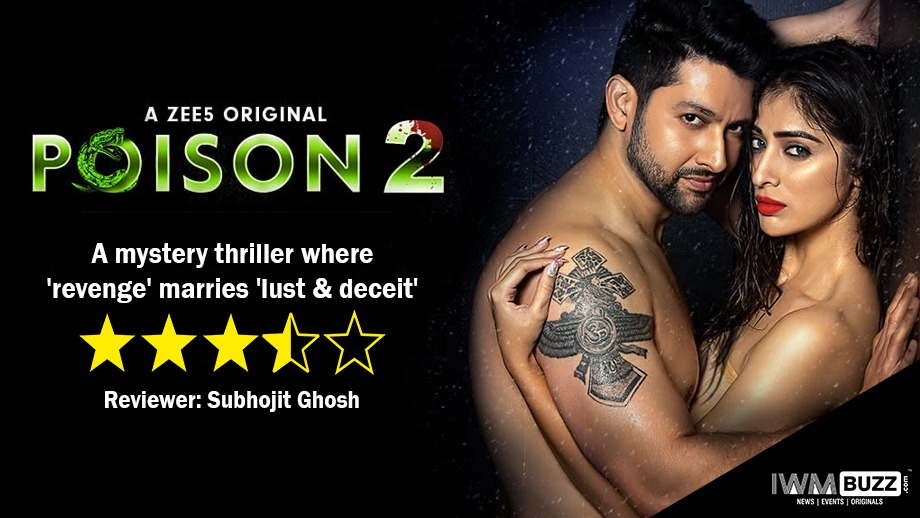 ‘Revenge is a dish best served cold.’ Familiar line, readers? That seems to be the driving force behind ZEE5’s latest offering Poison 2. The edgy thriller is the story of Aditya Singh Rathore/Jaiveer (Aftab Shivdasani), who’s only intent in life is to completely demolish and quell the ‘Josh team’ comprising Sara (Raai Laxmi), Oscar (Vin Rana) and Harsh (Zain Imam).

What’s intriguing and interesting is how the makers have embedded the ‘complexity’ of the plot with the help of a simple narrative. Jaiveer is the quintessential blue-eyed boy whose charming image manages to impress one and all. He has everything sorted in life. From a loving family and steady partner to a propitious career, he has everything going his way until one day when everything seems to go haywire and come to an end in the whisker of a second. He and his father find themselves in a spot of bother when they are falsely implicated in a case of diamond larceny and prisoned for the same. The shock is a bit too much for his father to absorb and he takes to suicide following which his mother lands in coma. Everything is destroyed in his family but things get worse when Jaiveer gets the shock of this life when his girlfriend Sara depones against him in court and the important realization dawns upon his head that his ‘friends’ and ‘close people’ were nothing less than vicious and threatening ‘snakes’. A bemused and upset Jaiveer swears to take revenge for whatever he has gone through.

Season 2 kicks off with his ‘new face’ and a ‘new identity’ in Aditya Singh Rathore where he sets an impression right from the word go by winning big stakes at the racecourse thereby completely surprising the ‘Josh Team’ comprising of his ex-girlfriend Sara, her brother Oscar and her present husband ‘Harsh’ who were pretty much the conspirators responsible for whatever he has gone through. It takes them quite a while for them to understand that Aditya and Jaiveer are the same people and the journey is filled with interesting and moving plot twists and turn of events. So, we better leave it for you to watch and figure out rather than giving away spoilers here.

The thin line of difference between ‘right’ and ‘wrong’ seems to blur more as we keep getting hooked on to watch all the 11 episodes filled with elements like tension, mystery, lust and deceit. The most important factor of any revenge drama is to keep the mystery ‘alive’ and not rush when it comes to giving easy giveaways and spoilers and that’s where Poison 2 stands tall. The multiple layers of all the characters appeal all the way more to the audience.

Aftab Shivdasani certainly shines in his digital debut. Raai Laxmi is magnetic and cogent in her performance and Zain Imam as Harsh is extremely suave thereby living up to his image of making women go weak on their knees effortlessly. Rahul Dev as officer Sikander Malik and Pooja Chopra as officer Isha do their best and manage to impress within their limited screen presence to good effect.

The dialogues are penned well, and crisp direction manages to keep you intrigued all the way through right from the first episode.

After watching Poison 2, you will certainly be reminded of a famous line from Swiss physician Paracelsus “Poison is in everything and no thing is without poison. It’s the dosage that makes it either a poison or a remedy”.

Well, in case of ZEE5’s Poison 2, it’s certainly a remedy for your lockdown boredom. A must watch if you are into crime thrillers.

Also Read: Review Of Putham Pudhu Kaalai: Leaves Much To Be Desired