IWMBuzz.com reviews the now-streaming ZEE5 web-series, Rangbaaz. Read it right here without giving it a miss. 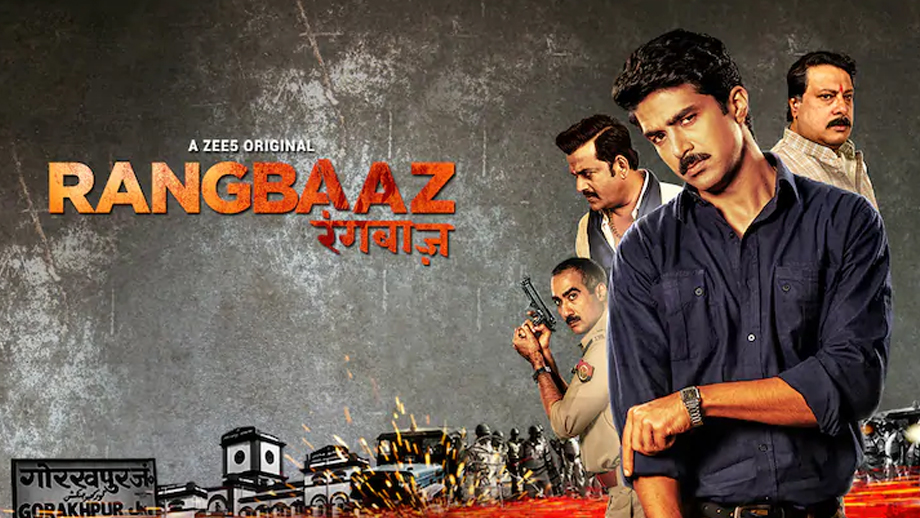 Twenty years ago, the nation was transfixed by the daring chase and encounter death of a notorious criminal. The UP police had managed to corner and kill one of the most dreaded gangsters of the day, a case that made headlines in all the major newspapers of the time. However, it wasn’t the bravado of the UP police that had grabbed the collective imagination of the public at large then. It was the stunning details of a life lived on the wild side; a life of crime, outrageously devoid of fear or remorse; the life of dreaded criminal, Shree Prakash Shukla.

Exactly twenty years later, India is again caught up in a whorl of fascination with that case of yesteryears, all thanks to the brilliant, star-studded web series based on it and now streaming on ZEE5, aptly called Rangbaaz. Rangbaaz showcases in vivid detail, the life and times of UP criminal, Shree Prakash Shukla (changed to Shiv Prakash Shukla in the series), laying bare the grisly specifics of his short life, in nine, finely-nuanced episodes.

As the facts of Shukla’s life of crime and murder tumble out into the public domain, web audiences watch in horror and fascination, absorbing the shocking true story of his meteoric rise in the world of crime, his stunning count of twenty cold-blooded murders in the span of a few years and his close association with top politicians of the country. It is undoubtedly a fascinating tale. And with it, ZEE5 has hit a home run in the current duel among OTT players to rule the genre of crime with tales of larger-than-life outlaws.

Rangbaaz begins in 1992, with a naïve twenty-year-old Shiv Prakash (Saqib Saleem) living a happy-go-lucky life in Gorakhpur. His days are spent studying in Gorakhpur University; watching out for his sister, Shweta; and flirting with Shweta’s friend. But one fine day, destiny plays its macabre hand and an eve-teaser, who had dared to tease his sister, dies at his hands. While it is an accidental death, wily politico, Ram Shankar Tiwari (Tigmanshu Dhulia), wastes no time in harvesting the opportunity fate presents to him. He whisks Shiv Prakash away to Thailand under guise of protecting him from imminent arrest. A thoroughly petrified Shiv Prakash agrees to the plan in mute resignation. Once in Thailand, the innocent young lad is convinced to repay Tiwari’s benevolence by working as his henchman.

Shukla returns to Gorakhpur a changed man. He takes the hand that fate has dealt him with and turns it into a winning one, albeit a short-lived one; which of course, he doesn’t know at that time. He breaks bread with Tiwari’s coterie of hit men, learns the ropes of the world of crime pretty quickly, and even bands together his own trusted troika of men – Nepali (Ravi Chaudhary), Sushant (Bharat Chawla) and Tanuj (Atul Pandey). And when he commits his first premeditated murder, the transformation of Shukla, from innocent student to sharp-shooter, is complete.

Rangbaaz chronicles this transformation in minute detail, taking us along in the journey of the makeover of a gauche young Shiv Prakash into the criminal Shukla, the most wanted man in India.

His metamorphosis is at once stark and spectacular. We watch in mesmeric enthrallment, as the shy and wary young student becomes the feared criminal who lives life to the beats of his self-composed gangsta rap. Once initiated into the world of crime, Shukla is unstoppable. He dodges the clueless UP police with calm disdain, plans murders with cold-blooded nonchalance and shoots his victims dead with practiced ease. As the heady power of the crime world and the unrelenting clout of the gun goes to his head, he takes an almost gleeful delight in pumping bullets into his victims. One or two shots are never enough for our trigger-happy protagonist – it has to be a full round, pumped into the almost lifeless body of his target. As the title song of Rangbaaz declares- ‘behte lahu ko samjhe gulaal yeh…..’. One cannot but agree with the lyrics after watching the series.

As the years go by, Shukla switches loyalties from Ram Shankar Tewari to Chandra Bhan Singh (Ravi Kishan), who further mentors him to hold his own in the murky world of politics and crime. In between, he manages to romance a hotel receptionist, Babita Sharma (Aahana Kumra), who becomes the love of his life. The two even plan a life together in a distant land, where the long arm of the law can’t catch up with them.

In the meantime, Shukla grows too big for his boots, and goes on a killing spree, murdering top UP politicians for money, and even Tiwari’s trusted aides. Eventually, he becomes enemy number one in Tiwari’s book. Tiwari bays for his blood and gets the UP police hot on his trail. A Special Task Force, led by hard-nosed police officer, Siddharth Pandey (Ranvir Shorey), is set up to bring Shukla to heel. Shukla manages to hoodwink the police each time they get too close to him. But he commits one cardinal sin that finally leads to his downfall. We won’t reveal the rest of the story, for fear of playing spoilsport.

But we will definitely say one thing – Rangbaaz is a masterfully made crime drama, the after-effects of which will stay with you, long after you’ve finished watching the show. The unnerving story of a good guy gone bad will wrench your heart and twist it with its pathos-laden undertones, until you feel a numbing pain in your chest for the promising life lost to a disturbingly sinister criminal system.

On the surface, Rangbaaz is simply a tale of the rise and fall of a dreaded UP criminal. But underneath its seeming simplicity lie manifold layers of harsh reality – the evil absolutes of the ominous politician-police-criminal nexus that is widespread in the country. It is prevalent as much in 2018 as it was in 1998, the year Shiv Prakash Shukla met his maker.

Rangbaaz is a gritty expose of the modus operandi of criminals-turned-politicians, who prowl universities in the hinterlands of the country, preying on the fears, vulnerabilities and insecurities of gullible young men, fostering those young men to become killers who will do their dirty deeds for them. Many a Shiv Prakash Shukla has risen from such backgrounds, making these the most fertile hunting grounds for wily politicians wishing to spawn their very own killing machines. Rangbaaz also unmasks the caste politics at play in elections, widespread in a large part of the country, but specifically in Uttar Pradesh. Shrewd politicians pit the Thakurs and Brahmins against each other, instigating violence, mayhem and bloodshed in the name of caste systems. The nation, its economy and development, bear the brunt of the violence while politicians laugh their way to power. It takes guts to show all this on screen, and Rangbaaz displays those guts in abundance.

And now, it’s time to write an ode to Saqib Saleem’s outstanding performance. To say that this is the actor’s best performance till date would be disgustingly underwhelming. It would be fair to say that Saqib Saleem has put in a performance that stands right up there with the best the film industry has witnessed in recent years. He is terrific as Shiv Prakash, getting under the skin of the dead gangster’s character with flawless perfection. He lends credence to his portrayal of Shukla, getting right each nuance, as also the dialect and mannerisms, with consummate precision. His is a crisp, bracing performance, and the glittering crest of the show.

Ranvir Shorey and Ravi Kishan give evidence of the vast reserves of talent that reside within them. Both have given measured performances, without a hint of unnecessary histrionics sullying the gravity of their roles. It is Tigmanshu Dhulia, however, who has caught our fancy with his brilliant portrayal of the cunning Ram Shankar Tiwari. The man is a marvel really. Not content with enamouring us with his stellar film-making skills, he has now taken it upon himself to regale us with his acting chops. And yes, he has nailed it stunningly. Tigmanshu Dhulia’s acting prowess is on full display in Rangbaaz, and he dazzles in his role, we must say.

Aahana Kumra doesn’t have much leeway to exhibit her acting skills; yet, she excels as Babita Sharma, Shukla’s love interest. All the other actors of the show have also put in their hearts and souls into the series, and it shows.

A very special mention must be reserved for Bhaav Dhulia’s direction. Each scene of the show has been lovingly shot, with obsessive attention to detail upstaging all else. The story unveils in a non-linear fashion, flitting seamlessly between the past and the present, with nary a discordant note marring the flow of the story and the proceedings. The edgy background music adds to the gravitas as the script unravels. Dhulia stays as close to the original story as possible, sacrificing frivolous show-sha at the altar of studied meticulousness. But then, that’s what makes the story so compelling to watch. It is stellar direction – storytelling at its very best.

JAR Pictures has given viewers a fabulous interpretation of the rustic background of India’s heartland, UP and the story of Shiv Prakash Shukla as he engages into the dark and dirty world of crime.

Watch Rangbaaz for Saleem’s spectacular acting, for its superb narration and for the gutsy gangster who is no more, but who’s left behind a tale that is the stuff of legends. Watch Rangbaaz, period.