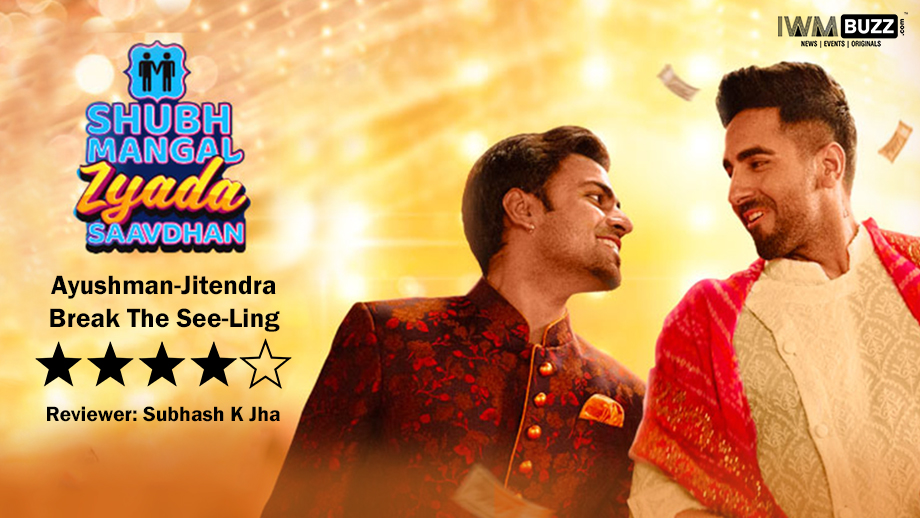 Why are films about gay people so sad? They are either about AIDS or star-crossed same-sex lovers who are doomed to die or suffer, take your pick.

Shubh Mangal Zyada Savdhaan (SMZS) breaks the glass ceiling and the gaze that sees the ling … it  not only normalizes  a same-sex relationship, it compels the homophobic onlookers—the frowning  family and the  sniggering relatives—to come around, to …well…if not accept than succumb to the pressures of normalizing homosexuality that seems to be building up like gathering clouds  all around the homophobic cartel of wedding revelers, none more so than  patriarch  Shankar Tripathi (Gajaraj Rao, splendidly stoic starchy and slightly sleazy  in his prudery) who sees his only darling son Aman (impressive debutant Jitendra Kumar) kissing with  his friend Kartik (Ayushmann Khurrana, turning gay with full conviction) in a train filled with wedding revelers.

Crazy things keep happening all through SMZS, as though the Gods of all Moral Issues had decided to take a small break to  just let the chaos of characters dive into their own fears anxieties and insecurities and come out screaming, kicking, grunting  and,yes, moaning, in pleasure and in pain. And till death do they part. The pain and pleasure, I mean.

Just to let us know that writer-director Hitesh Kewalya means business, the film plunges without losing a minute, into the Ayushmann-Jitendra relationship as the world around them breaks into wedding festivities. The tone of the film is constantly celebratory. It is no coincidence that the breakneck happenings in the film are positioned, missionary style, just days before Article 377 is repealed. And when the breathless TV anchor comes on to make that historic announcement; I swear I saw a man in a pink shirt being man-handled in the background.

This is the kind of a tongue-in-cheek  film that refuses to buckle under the “responsibility”  of telling us what same-sex couples would like to hear or what is politically correct to say about them. Not that the raucous laughter (in one sequence Ayushmann  dressed with a ghunghat as a  bride sneaks to the mandap to marry the man who is being force-wedded to a not-so-susheel girl)  takes away from the film’s seriousness  of purpose. On the contrary, the more raucous the laughter the heftier the bite in the butt of the butt-bite haters.

Speaking of bites in the butt, try this. The girl Kusum (Pankhury Awasthi) is eager to marry a gay man as long as he lets her do her own thing while he does his own. Pulling the stree–ling?

Speaking of laughter Neena Gupta discovers her funny bone all over again  after Saath Saath 40 years ago. As a mother who is pushed into accepting her son’s homosexuality she has a whale of a time making raunchy fun of her intensely homophobic screen-husband Gajraj Rao. Gupta and Rao were a scene-stealing couple in Ayushmann’s earlier game-changer Badhaai Ho. Here they are on a totally different trip, and enjoying every bit of it.

But the finest  character in this zany homage to homosexuality is  an absolutely wacky girl called Goggle, so-called because she insists on wearing sunshades all the time (there is a reason for it, and I am not telling). Goggle played with looming relish by Maanvi Gagroo is desperate to get married, so desperate that she rides to the mandap on a horse eager to just get it over with. She’s also the most liberal character in this plot of prudery, outdated morality, and worm-infested broccoli farming. We need more ball-breaking rule-breakers like Google to change rigid mindsets.

We also need  more films like Shubh Mangal Zyada Saavdhan which  break the god-damned rules of ‘right’ living  without getting judgmental about the conservative elements. A salute and a hurrah for the writer-director for sustaining a mischievous tone of rebuke and ribaldry all through without losing sight of the narrative’s serious undertones.

We need  more  actors like  Ayushmann Khurrana  to play characters who are flawed frail and never afraid to fall or fail. As  the nose-ringed precocious  and  cocky Kartik, Ayushmann  hits all the right notes, punches all the  nosy noses and trots away into the  sunset with the  love  of his life as  though by birthright. Jitendra Kumar as the  more inhibited semi-closeted Significant Other comes up with a surprisingly articulate volume of expressions for a newcomer, ranging from hurt to ecstasy.

Jitendra has a bright future. As for more unapologetic remorseless films about homosexuality such as this, only time will tell.