I always knew that there would be a backlash from Aditi Rathore-Zain Imam fans: Tanvi Dogra | IWMBuzz
Subscribe Now
Television | Celebrities Tanvi Dogra is quite happy with the initial run of her new Star Plus show, Ek Bhram Sarvagun Sampanna. “It is a matter of honour to have moved from Star Bharat (debut show, Jiji Maa) to Star Plus, and I thank the honchos for the same.”

Talking about her character, she says, “Kayva has not got a great welcome at her in-laws, post marriage. So she is still trying to find her feet. Also, her equation with her husband Kabir (Zain Imam) is iffy right now, given that they were first devar bhabhi and now man and woman. So it will take time for the ice to break. Friendship needs to happen first, before we can think of love.”

Point out that the ratings have dropped, and she says, “Yes, after a decent start, we did have a drop in week 2, which was quite disappointing. But these things do happen with the IPL going on. I am sure we will be back in action soon, as we have great drama lined up. But yes, we will need to be on guard as the cricket World Cup also kicks off very soon.”

“The best part of our Sunny Side Up Films production is that it goes against the conventional logic that leads have to be white as lilies. We have brought in a grey lead, Jahnvi (Shrenu Parekh), whose actions might be dark, but her agenda is good. After playing strong women characters, I next want to play a jhalli girl next door.”

When talking about co-star Zain, Tanvi says, “He had warned me about how possessive his fans can be. So I always knew that there would be a backlash from Aditi Rathore-Zain (Namkarann) fans, regarding my casting with him. Forget me, even his female friends who just post pictures with him get blasted on social media, where you have the freedom to say whatever you want,” says Tanvi.

Commenting further she adds: “I would tell Zain that even Dishank Arora and me had our fair share of fans during our Jiji Maa stint, but they did not get as personal as the Aditi-Zain lot. I don’t read my DM, for it is too much negativity.”

On a closing note she adds, “Having said that, I don’t take it too seriously as it shows that they are watching my show. And yes, I know over time, as the romance on screen will develop, they too will come around. So peace out and love to you all.” Naamkarann fame Zain Imam is a rockstar, does a Shah Rukh Khan 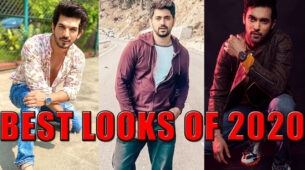