Shilpa is overdoing it; I am worried about Vikas - Ratan Rajput on Bigg Boss 11
Subscribe Now
Television | Celebrities Ratan Rajput who has very recently wrapped up the shoot of her show Santoshi Maa on &TV is fully supporting her best friend Vikas Gupta in the ongoing big ticket Colors reality show Bigg Boss 11.

Says Ratan, “I am worried about him as a mother. Normally also this show is no walk in the park, for you are not playing with equipments rather with human beings. The mask falls off as you also can’t pretend for long. This season, things have become tougher as most contestants have come over-prepared with the notion that you have to fight to get noticed.”

Ratan feels Vikas comes under the radar everytime irrespective of how he reacts. “Vikas is unnecessarily targeted on account of being a producer. When he signs up people, it is assumed that he is doing it for friends. And when he does not, he again becomes villain of the piece. Many people who don’t know him also join the party.”

“Here I must add that he has very gracefully accepted what he is. Many people say that he should control his anger, but things do go out of hand when the family is targeted. Even I being a simple girl will spew abuse if put in the same spot. The format of the show is such that contestants tend to get more emotional,” she states.

Coming to Shilpa Shinde with whom Vikas has had major fights with, Ratan says, “I feel she is over doing it. Whatever happened between Vikas and her during Bhabhi Ji Ghar Pe Hai (&TV) was professional. As channel head, he asked her to make a choice for as per the contract she could not do any other show. Anybody else in his shoes would have also acted in a similar manner. In all this, why did she need to drag in his personal life? I felt it was unreasonable!”

Ratan adds on, “What I also find funny was that that she does not seem to have any personal stories to tell. All the time she talks about getting even or on the casting couch. No producer or director in the industry is pious, so to judge some on the same is wrong. And if she has personal evidences about the same she should come forward with it.”

Here she stresses that, “The Bigg Boss house is such that sometimes enemies can become friends for you get lot of time to get to know the other. You never know which trait might change the game or you simply get tired of fighting and bury the hatchet. Hope something similar happens between Vikas and Shilpa as well. I also wish that she resumes work once back and the ban issue is settled.”

Point out that knowing the sensitivity towards same sex relations, should Vikas have gone in the first place? “No he is not the first person like that, this has been happening for ages. Also does that mean such people should be isolated from society? Why should he hold back due to prejudices of others? He regards himself as normal like you and me.”

Ask her about the other contestants in the house and she says, “Arshi Khan also abuses a lot. A girl can wear short clothes, but how can you talk like that? She can really shame herself, no guy can do what she does.”

In closing Ratan who herself lasted a month during her Bigg Boss stint 7, says, “How much ever smart a contestant thinks he/she is, the ultimate game is played by Bigg Boss. The return of Priyank Sharma who crossed the line due to Arshi’s actions is also part of the same game. It would be a stinging rebuke to Arshi’s and Akash’s plan to get rid of competition.” 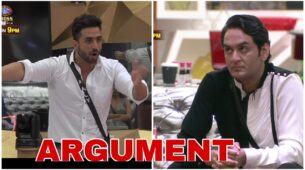