Discovery JEET set to launch on 12 February: An Analysis 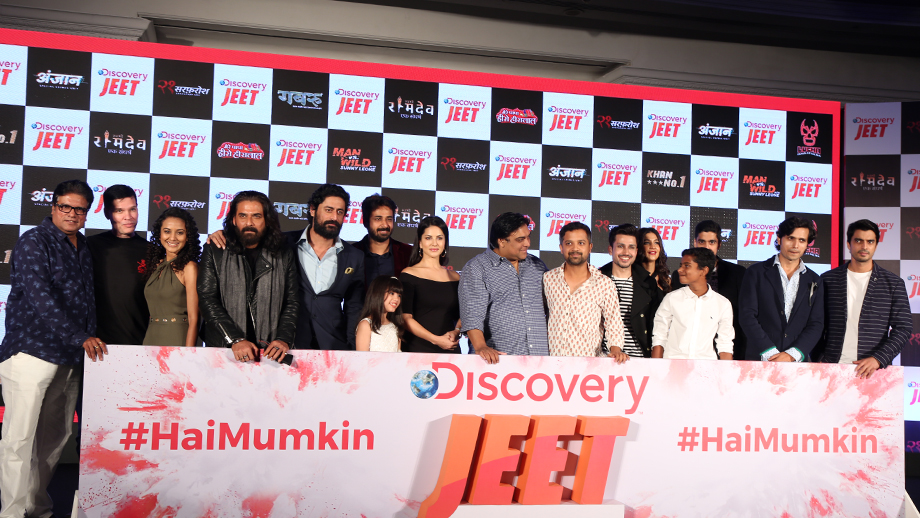 At a time when the world is going frenzy and tizzy over web entertainment/content, Discovery: the hitherto flora & fauna network has decided to toy with the word ‘fiction’.

Come 12 February and a new GEC (General Entertainment Channel) Discovery JEET will hit airwaves, nudging and pushing to create its own niche among television watchers in India.

Discovery JEET: the entire plot seems to be a portmanteau of west meets east, a perfect ‘sangam’. Or else how would you best describe a train of thought which showcases a bearded Ramdev baba and mass sensation Sunny Leone?

We were there at the launch presser of JEET and the network flexed its muscles with a commendable casting and creator show of strength.

The theme is ‘inspirational’ and tugs the aspirational wave of current India. The crop of shows has a Mohit Raina donning an army uniform, to a rickshawallah Sarwar Ahuja toiling for her daughter’s dreams, to a Baba Ramdev breaking the glass ceiling (here a window: literally),  Sunny Leone narrating ‘tales of wild’, rappers crossing vocal swords, Ram Kapoor tickling your belly et al.

Promos, presentation and marketing have piqued interest, of us yes, what of the audience? That we have to wait for the BARC ratings.

Having said that, the current top and known GEC players have been walking on slippery land, grappling to anchor the fiction mandate. ‘Old is gold’ still rules the space as week after week popular long running shows top the ratings chart. New attempts either die a premature death or drag on for a year before meeting the scissors.

In such a scenario, can JEET weave a winning formula?

One look at the channel’s opening bouquet of shows, and you would know it’s a chocolate box containing all flavours. Stories are varied, catering to all major genres, perfect mix of newcomers and known faces. The idea is to bridge the gap between ‘bharat’ and ‘India’. Tell stories of hinterland, with dollops of emotions and packaging is such that it would also interest a South Mumbai Netflix watching ‘cool’ audience (Netflix is the streaming partner).

The idea seems as impressive as ‘36 inch ka seena’. Fingers crossed that the ploy roars to deafening noise and not prove to be a mere paper tiger.

So, all readers of IndianWikiMedia, would you all stare way from Taaraks and Kumkums of the world and watch JEET? Mumkin Hai?

Let us know your thoughts on the same by tagging our social media pages.