The Karan Kundra starrer show makes for a good watch When Ekta Kapoor does something, she does it in style. Her shows, each a cult in its own right, are all about larger-than-life characters, business tycoon families, lavishly opulent sets- the works. Dil Hi Toh Hai, her latest offering on Sony TV and ALTBalaji, has all this and more. It is interesting that a show is seeking audience on TV and web as well.

The show revolves around the fortunes of the Noon family– business tycoons and owners of the world-renowned Noon Pharma. Vijaypath Noon, played by Bijay Anand, veteran actor and erstwhile Bollywood hero, is the patriarch of the family (sheesh…Vijaypath….how corny and unimaginative! Surely, they could have done better than that…). Anyway, to get back to the story, Vijaypath has a huge family, comprising wife Mamta, three sons, two daughters, a mother and a taari, aka nanny in plain-speak, all living together, happily ensconced in their huge, palatial home (obviously, no? We couldn’t have anything smaller now, could we?)

Karan Kundra, fresh from the success of his ghost-busting Bollywood outing, 1921, plays eldest son, Ritwik Noon. Ritwik Noon is the quintessential romantic hero– the stuff teenaged girls’ dreams are made of– dark, handsome and brooding, playboy with a roguish charm, beds women by the dozen but gives none of those women entry into his hardened-against-love heart. Except one…..enter Dr.Palak Sharma, clinical nutritionist par excellence, best friend of the girl Ritwik has just dumped and left broken-hearted, and, as of now, his bête noir. YogitaBihani portrays Palak–a dream debut in conventional TV shows, for the fresh-faced model.

Ritwik’s hard-heartedness is not without reason. An unsavoury incident in his past has made him what he is– he hates women with a vengeance, using them only for bodily pleasures and then, dumping them spectacularly. For Ritwik Noon, all women are after just one thing- money. Numerous scenes rub in his contempt for women. In one scene, he convinces a woman that he loves a bald pate on his women. The poor woman shaves off all her hair to impress him. Ewww! And that’s not all. He even warns his close friends, Rohit and Aman, against getting involved with women.

Well, since Ritwik has dumped her best friend Aarohi, Palak bears a humungous grudge against him. But that’s not the real reason for the animosity between them. On the basis of a glitch in its formula, Palak rejects a new diabetes drug created by Noon Pharma. Ritwik hates her guts for rejecting a drug that has been approved by nineteen leading experts of the world, and which has the potential to revolutionize diabetes care. He thinks she’s doing it to get even with him for dumping her friend. Ritwik catches Palak’s boss in a compromising position with his mistress, and blackmails him into approving his drug. Palak resigns from the lab, and vows to stall the release of the drug.

In the meanwhile, Ritwik’s granny decides to try out said medicines and lands up in hospital. Around the same time, Palak gets her journalist best friend, Setu, to publish an article in the newspaper about Ritwik’s fraud and blackmail. Since Vijapath has handed over the reins of the company to Ritwik, he knows nothing about Ritwik’s antics and run-ins with Palak. But since he’s still the owner of the company, he’s packed off to jail for fraud, by a grouchy, vengeful police officer (there’s a tiny side story here, about why this cop is vengeful– a totally needless aside, in our opinion).All hell breaks loose on Vijaypath’s arrest. A crazed-with-anger Ritwik swears revenge against Palak. He hatches a plan to coerce her into joining Noon Pharma, and once she joins, proceeds to make life hell for her.

So, that’s the entire premise of the story until now. Love is bound to blossom in the ensuing episodes. How? Remains to be seen; When? As soon as the writer and director tire of their protagonists’ endless squabbles, that’s when.

On the face of it, the show is a story about a big, fat Indian family. But at its heart, it is a typical mushy, Mills and Boons romance¬– business tycoon-cum-playboy hates women; along comes a woman with a heart of gold, who loves kids, her ideals and her work- replace these with anything else you please, just leave the heart of gold bit intact, will you¬; she makes him see the light, they fall in love and live happily ever after.

Except, of course, since this is an Ekta Kapoor serial- the Grand Dame of TV drama and saas-bahu sagas–a simple happily ever after is hard to imagine. Far from it…Watch out for unlikely twists and turns in the story, good guys turning rogue, rogues turning good, absentees appearing out of nowhere, regulars going absent, scheming Machiavellis with their maddening machinations, and other what-nots.

One thing that is truly different about this show is its boldness quotient. There’s a full-blown smooch in the first fifteen minutes of the show. There’s also a heavy, making-out scene in one of the subsequent episodes. There’s talk of sex education and a pregnancy test kit also makes its appearance. Ahem…..who else but Ekta Kapoor, to take TV-dom to where it has never gone before.

That notwithstanding, the story of Dil Hi Toh Hai is nothing to sing hosannas about. But there’s this – its heavyweight, ensemble cast. The spectacular cast of the show is its true calling card to fame and eminence. Apart from the aforementioned ones, there’s Poonam Dhillon as Vijaypath’s second wife and Ritwik’s stepmom, Mamta Noon ;Akshay Dogra as second son, Rishabh Noon; Sudeepa Singh as his wife, Aditi Noon ;Gautam Ahuja as youngest son; Asmita Sood, in the role of Setu; Pooja Banerjee, of Roadies fame, playing Aarohi; Krishna Shetty as Rohit; Abhinav Kapoor as Aman; and lastly, handsome hunk, Keith Sequeira too. Together, they are bound to whip up an interesting melee.

Gautam Ahuja stands out in the role of Ritwik’s 15-year old brother. He’s cute, lovable and endearing. Asmita Sood is fantastic as Setu, Palak’s journalist friend. She owns the frame in the scenes she features in. The rest of the cast performs adequately.

Karan Kundra is a sight for sore eyes. And owing to his two-year hiatus from TV, the buzz around his comeback is massive. Girls are already going gaga over his turn as the smouldering hot Ritwik Noon. He’s got an air of vulnerability about him that is deviously alluring. His bad boy role-play, coupled with that guileless innocence, can charm the pants off even the most unaffected of women.

Yogita Bihani is good as Palak, but not awesomely great. Her exaggerated earnestness seems way too pretentious. Or maybe, it is the haloed character she plays that’s getting to us. It’s about time Indian TV showed its characters in shades of grey. Wake up and smell the coffee, guys! Pristine-white, purity-drenched characters don’t exist in real life. Neither do black-as-night, evil-personified ones. Show us some real people, for heaven’s sake.

That said, we’d love it if the makers restrict Dil Hi Toh Hai to a soppy, syrupy romance, taking it to its logical end, and bidding goodbye, the moment it’s over. There’s nothing to beat a good ol’ romantic escapade. Think Outlander, Cedar Cove and other out-and-out romance shows. We don’t want all those dizzying, hard-to-keep-pace-with twists and turns, manipulative good-for-nothings, endless plots, and definitely not saas-bahu shenanigans, please. Honestly. Cross our hearts and hope to die.

Nevertheless, Dil Hi Toh Hai has begun on a good note, and is quite an enjoyable watch until now. We, at IWMBuzz, would rate it 3.5/5.

Psst, a little birdie just told us that Poonam Dhillon is on her way out, to be replaced by Rajeshwari Sachdev as Mamta Noon. Sigh, that’s the way the wind blows, dearies. 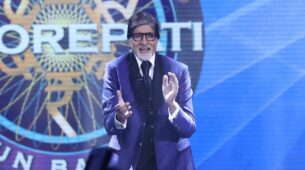