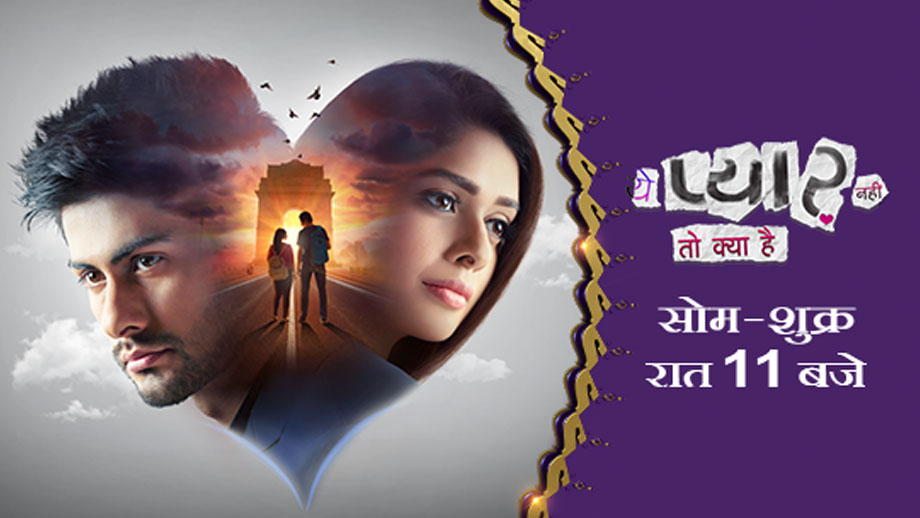 To be honest, the new Sony show, Yeh Pyaar Nahi Toh Kya Hai, is nothing different. Similar storylines have been done before. But yes, what we liked was the subtler treatment. The show is following the Sony show template- not loud, and sans typical family drama, as seen on other channels.

More and more TV shows are now shifting shooting base to Delhi-NCR. Yeh Pyaar Nahi Toh Kya Hai, produced Dilip Jha who gave us Ek Duje Ke Vaaste earlier, is no different. Any chatter about Delhi is incomplete without a mention of pollution, and the same was done right up front.

The very rich Anushka Reddy (Palak Jain) returns home from the States to a plush mansion, complete with all the trappings. Cut to male lead, Siddhant Sinha (Namit Khanna), whose principled father, Prabhakar Sinha (Anuraag Arora), works for Anushka’s dad, KK Reddy (more about him later). Siddhant is a crafty lawyer, who does what it takes to get the job done. He is shirtless in his first scene- an attempt to win over the female audience.

Newbie Palak is doing a good job so far. Anushka and Siddhant apparently had a teenage scene which went sour; they still hold a torch for each other. The narrative keeps going into flash-back mode. We quite liked the scene where Siddhant smartly protects himself and her from the cops, after racing away with their vehicle.

Veteran film actor, Manish Chaudhary, is doing a swell job as the rich South Indian business magnate, KK. Manish has got the south accent spot on. KK is ambitious and yet has some scruples; he lets go a lucrative contract, as the other guy had insulted Prabhakar. He loves his daughter and wants her to join his business empire. Thus you have business rivalry running seamlessly with the love story. Enter, crime as well- Prabhakar gets shot.

To complete the canvas, we also have the families of both the leads.

Anushka’s anna, (elder bro), Shrikant Reddy (Vishal Malhotra), loses his cool very quickly. He lands up in a dope case, where his legal counsel Siddhant does the 1985 Anil Kapoor ‘Meri Jung’ track, of taking dope and then acting as if nothing has happened, to get him off the hook. It is a different matter that he then has to literally fight for his life. Interestingly, he gets well very fast and also attends the Reddy party.

Namit is also doing a good job of depicting someone who resents his old man for not helping him get on the fast track to life. He brings out the typical swag of a Delhi-walla with ease. He was first noticed in the Vikram Bhatt web series, Twisted. Hope he and Anushka quickly come to the point on what made them go their separate ways in the first place, thereby setting the stage for a fresh romance.

All hell will break loose, once KK’s family comes to know of the Anushka-Siddhant equation. The same old rich vs poor saga will then come front stage. The north-south divide, paratha vs idli, gives them more options to play.

Anushka’s other bro, Kartik’s (Ankit Raj) character is yet to open up. He is cool towards his sister, but will not be on the same page when her love affair with Siddhant opens up. To further spice up matters, the creatives have the option of showing something brewing between him and Siddhant’s younger sis.

Daily shows on Sony have never rated big, even on super prime time. So Yeh Pyaar Nahi Toh Kya Hai, in a light slot, has its job cut out. But yes, every GEC needs to increase its FPC, so for Sony to reopen the 11 pm slot is an obvious step in the right direction.

In closing, we do have to point out the disjoint we feel when watching daily soaps and international TV and desi web series. The women in the former are always overdressed and stay away from alcohol. Hope our TV bahus and betis become more modern, at least as per their characters’ requirements- like Anushka could wear short dresses and booze, like most rich Delhi gals do.

Above all, the fact that the show has been shot in real locations keeps the interest high.. Let’s see how the story pans out in the time to come.

We at IWMBuzz.com rate this effort with a 3 out of 5 stars.