It is a show about a family in which all the members are Baavle and Utaavle. Everyone is crazy and is full of madness. There are 25 members in the family, each with distinct characteristics. Guddu is the most desperate to get married and hence, wants his elder brother to get married quickly so that he can get married next. He has been in search of a suitable girl and in an embarrassing situation has finally met her, unfortunately and coincidently, under his Bhaisaab and Bhabhi’s honeymoon bed. In their first meet itself, Guddu has fallen in love with Funty.

Tell us something about your character- Guddu

Guddu is a very simple and fun-loving guy. He is also very innocent and hence his Bhaisaab, who is the closest to him, keeps explaining him about things that men encounter in their lives. He is very excited to get married as soon as possible; this has been his only dream since forever.

How has the experience been so far, shooting on the set of Baavle Utaavle?

It has been hardly 10-15 days since we started shooting and it has been a wonderful experience until now. The entire cast and crew is extremely sweet and supportive. Like I said, the show is about a family of 25 members and it is important that all of us work as a family on the set. Everyone has been working very hard and we hope the viewers enjoy it as much as we did.

What made you take up this role?

The first time I heard the narration of Guddu’s character and gave the look test, I got a feeling that this character is made for me. So, a lot of things happened in between but finally, I am here as Guddu today. The character has a lot that can be done with it and I consider myself fortunate enough to be playing Guddu. I have done some serials previously but had never done a comedy one. I have always heard from people that it is difficult to do comedy but never experienced it and with Baavle Utaavle I got the experience that it actually is a tough task. While doing daily soaps, you can cheat many times but you cannot do so when doing a comedy show because if you lose your expressions even for a minute, you will be caught immediately.

We are now in 2019. Do you feel we have, in our society, progressed ourselves to express our intimate feelings properly?

I would say, not completely. However, due to social media and digital platforms, a lot of such things have become very open. I think it is necessary to have this change in the society and be able to talk about things openly.

Guddu is a carom champion in the show. What such skills do you possess in your real life?

Personally, I love playing and watching cricket as it is my favourite sport. However, I do love every other outdoor and indoor sports.

I started my career with historical shows like Shivaji and Mahabharata. Later, I also did some daily soaps but Baavle Utaavle is a comedy show and I am doing it for the first time. Its altogether a different experience for me as it is really difficult to have a good timing in comedy. However, in this show, the script is its main strength and thus, we don’t have too much difficulty while performing.

What are your expectations from this show? What will the audience take away from it?

The concept of the show is very different and audience has not been previously exposed to such concept. The show is portrayed in such a cute manner and the viewers will feel that every character is really innocent rather than being cunning and cheap. I strongly believe and hope that the audience will enjoy watching the show as much we are enjoying working for it.

After playing some serious roles, is it challenging to attempt the genre of comedy?

As an actor, you have to try everything in order to test your limitations. I have always wanted to do a comedy role. In my real life, I play a lot of pranks with my co-actors and people do believe that I have got a very good sense of humour. In comedy, however, it is important to get the correct timing and I wanted to test myself with this. Finally doing a show a like Baavle Utaavle, I realized about my capability of doing comedy as well.

What are your thoughts on getting married in real life?

Obviously I want to do it but there’s a lot of time for it. So, currently my focus is only on my career and have no plans of marriage for another 5 years at least.

Are there any similarity between your character on the show and you in real life?

Simplicity is something that is similar in me and Guddu. I am shy as well, like Guddu, and it takes time for me to gel up with people. But also, just like Guddu, I think I would love and be completely devoted to my partner, whenever I do.

Have you done any specific preparation to get into the skin of the character?

We did some workshops before the shoot and everyone had to work on their diction. Since the show is set in the backdrop of Madhya Pradesh, it was very important to work on our tones and the mannerisms. 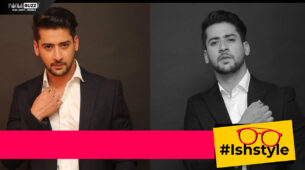 Paras Arora REVEALS why he misses his fashion wardrobe a lot