Vibhuti turns into a monkey in Bhabhiji Ghar Par Hai In the forthcoming plot, Vibhuti has turned into a monkey due to being bitten by one. He bites Tiwari as well. Tiwari bribes TMT to catch Vibhuti and put him away in a forest.

Later, TMT has turned into the forest police officer and are standing at a tea stall when Tiwari comes with no clothes on him and is only covered by Anita’s dupatta. He mentions that Vibhuti has stolen his clothes and run away. TMT kidnap Vibhuti but he frees himself and complains to Anita.

On the other hand, Anita comes to know about Vibhuti turning into a monkey and mentions that she actually likes Vibhuti’s new avatar.

Wow! What will be a new challenge for Tiwari in the coming episodes? 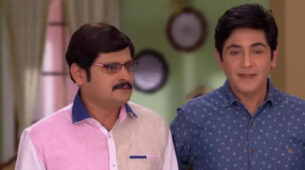