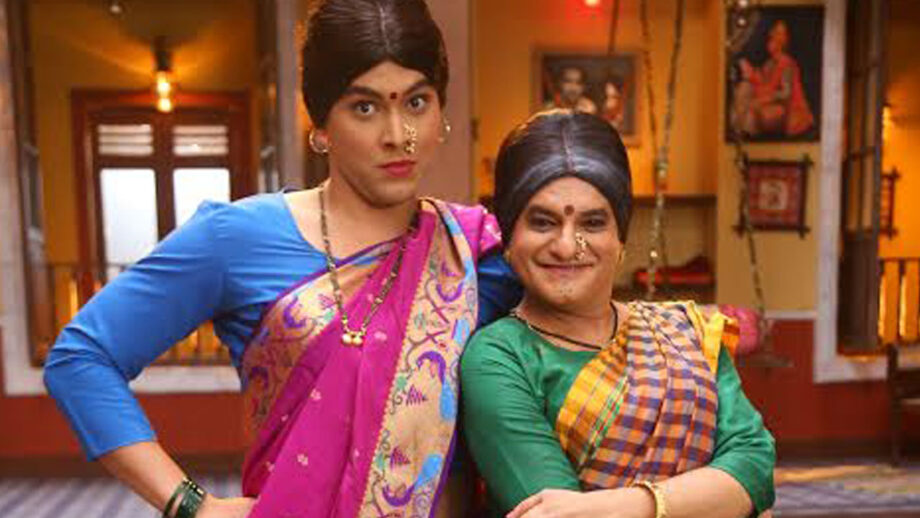 Abhishek’s effort to stay closer to the love his life, Gayatri (Akshita Mudgal) and his family comes to an end. Abhishek’s disguise as Sulakshana and Mahendra’s as Chandramukhi is out in front of Anna (Deven Bhojani) and it will be interesting to see how Anna reacts to this. Sony SAB’s light – hearted show Bhakharwadi is about see a dramatic turn of events that is bound to keep the audiences engaged.

Mahendra (Paresh Ganatra) went a long way to reunite his daughter, Gayatri, and his son-in-law Abhishek (Akshay Kelkar) after a major fall out on their wedding day. While the duo, Sulakshana and Chandramukhi created a special place for themselves in the Gokhale household, the hidden truth had a strange way of revealing itself.

In the meanwhile, Anna while visiting one of his clients, comes across the man who posed as Gayatri’s kidnapper, who then reveals the true identity of Chandramukhi aka Mahendra. In a dramatic turn of events, Keshav who had always doubted Chandramukhi and Sulakshana’s intentions, exposes both the men in front of the families. Anna is furious while others are shocked.

What does the future hold for Abhishek and Gayatri? Will Anna ever forgive Abhishek for deceiving him again?

Deven Bhojani, playing the role of Anna said, “Anna stands by the principle of honesty. He had not imagined that his son, Abhishek would deceive him this way. The episodes further will showcase the various slice of life that Sony SAB is known for and also portray the many emotions my character will go through with the upcoming twist but all on a lighter note. Anna is furious and now only time will tell if Anna ever forgives Abhishek again. So stay tuned.”

Akshay Kelkar, playing the role of Abhishek and Sulakshana said, “Abhishek is dumbstruck as his disguise is exposed in front of his family. The episodes further will witness an emotion shift as everything becomes intense as Anna has found out that is son was deceiving him again. It will be interesting for our viewers to witness what would happen next. So keep watching Bhakharwadi to know Anna’s verdict on Abhishek’s actions.”