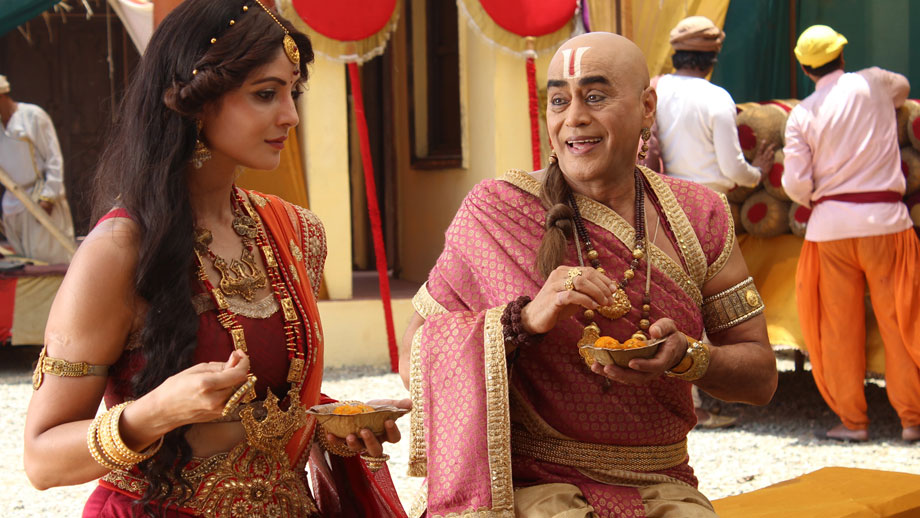 Krishnadevaraya (Manav Gohil) and his thriving kingdom Vijayanagar will soon be under a vicious spell on Sony SAB’s Tenali Rama. The show which recently completed glorious 500 episodes, is phenomenally garnering immense love and support from its viewers and has some mysterious twists and turns coming up in the show.

Previously, on a visit to Ujjain, Krishnadevaraya catches a glimpse of an item which is well protected behind curtains and he wishes to take a look. To make the situation interesting, the King of Ujjain challenges Krishnadevaraya in a game and if he manages to win, only then will his wish be fulfilled.

Krishnadevaraya wins the game and lays his eyes on the magnificent replica of Vikramaditya’s throne and expresses his desire to build the same for himself in Vijayanagar.

After the convoy returns to Vijayanagar, the King of Ujjain, keeping his promise, sends 6 statues that depict 6 sins visible on the throne in Ujjain, to help Krishnadevaraya replicate the same.

Rama (Krishna Bharadwaj) senses trouble and tries to stop the King from installing the sinful statues on the throne but Krishnadevaraya is blinded by his desire of sitting on the utmost replica of the throne.

A mysterious woman carrying immense wealth soon makes her way to the Vijayanagar darbar claiming to return the King’s monetary favor made to her family years ago while also informing everyone that she is looking for an eligible match. Everyone is eager for this opportunity especially given her wealth while the kingdom is slowly coming under a sinful spell.

Who is this mysterious woman and why has she come to Vijayanagar? Will Rama be able to stop her from casting her evil spell on the king and the kingdom?

Manav Gohil, essaying the character of Krishnadevaraya said,” The show is at a new turning point. Krishnadevaraya’s ability as a king is being challenged. The upcoming episodes will be exciting for our viewers. I would like to take this moment to thank our audience for the support and all the love you all have showered us with.

We have successfully completed 500 episodes which is really overwhelming and at the same time really motivating. We want to keep entertaining our viewers. The upcoming episodes bring a new side of Krishnadevaraya. So stay tuned!”

To find out the identity and the agenda of the mysterious woman in Vijayanagar, stay tuned to Tenali Rama every Monday-Friday at 7:30 pm only on Sony SAB