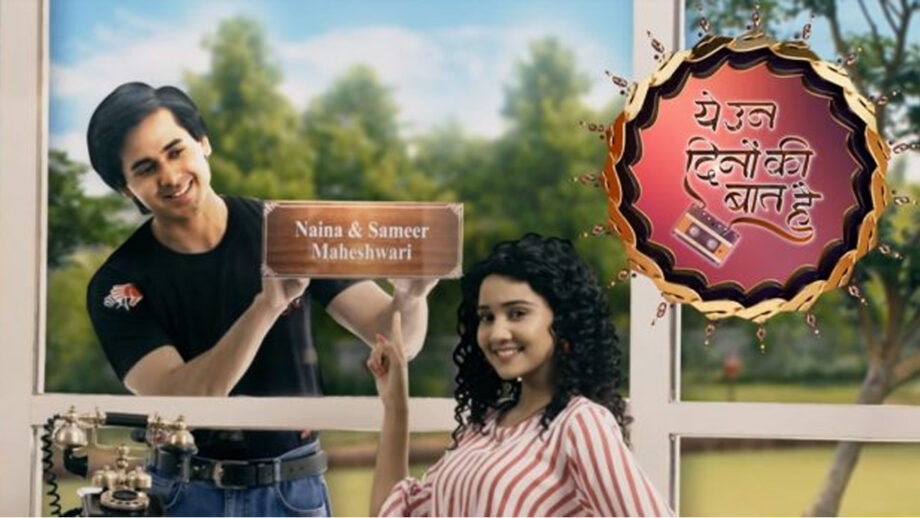 Today’s Yeh Un Dinon Ki Baat Hai 09 August episode begins with Rakesh bringimg electrician and he started fixing the fuse. Naina (Ashi Singh) was screaming in pain in the lift. Light came back. The ladies stepped out of the lift. Sameer (Randeep Rai) asked Naina if she was fine. Sejal was shocked to see Naina. Gopal told her. Rakesh asked them to come but Gauri reasons that it was too late to go to hospital. They will do the delivery at home. Everyone panicked hearing it. They took Naina inside. She was screaming loudly. Nirmala ji was concerned about Preeti. Shubham made her sit on the sofa. They waited outside anxiously as Gauri, Sejal and Vanita took Naina inside. Doctor was also taken inside the room the moment she entered. Sameer was seen praying in a corner.

Rakesh joined him. He tapped at Sameer’s shoulder reassuringly. Doc announced the birth of a baby girl. Naina smiled. Vanita asked as to why the baby wasn’t crying. They waited with bated breath. The baby finally cried. Everyone smiled in relief. Sameer’s eyes werr red. Gauri took the baby in her arms. Sameer went inside. He sat next to Naina and kissed her on her forehead and apologized for leaving her alone. She congratulated him. They got an angel. He congratulated her as well. Gauri, Sejal and Vanita smiled. Sameer rested his head against her. He finally held his baby in his arms. Naina got emotional as well. Sameer talked to his daughter. She was Papa’s Gudiya. Naina promised sweet things to her daughter. Naina looked at him. Rakesh looked at them. Naina and baby’s grahpravesh was going on. Everyone had brought toys for her. They played with the baby and simultaneously took care of Preeti as well. Naina and Sameer folded their hands in reverence in their house temple. Everyone looked at Naina and Sameer as they prayed.

Also, Read Sameer and Naina return to Ahmedabad for a happy ending

Rakesh held the baby but Sameer argued that it was his turn. Even nurse didn’t let him hold her. Preeti said she won’t go to either Naina or Papa, she would be with Massi. Rakesh and Sameer kept arguing. Rakesh reminded him that he had given him his daughter to look after. Sameer curiously asked Naina about the baby and its antics. They tried to close in for a kiss twice but the baby patted her hands at them. Sameer joked that she had already started coming between them. Naina smiled. They lied down. Sameer thanked Naina for giving him the biggest happiness of his life. He held her hand. Nirmala ji sat next to Preeti. Naina gave birth to a baby girl and her mother had two daughters. She guessed her family was destined to give birth to girls only. It was okay if a girl was a second baby. Preeti said what if the baby boy took after Shubham. He too would speak of economics. She guessed it was better if it was a girl. Nirmala ji went quiet. Sameer was taking class from his mummy on phone as to how to make the baby wear a nappy. Naina smiled. Sameer called it complicated. Rakesh showed him how it was done. Sameer tried next. Rakesh teased him. It wasn’t too easy to become Papa.

Nirmala ji, Preeti and Shubham came to the society. Shubham was holding his baby in his hands. Nirmala ji announced the good news loudly for everyone. He got blessed with a grandson. She distributed sweets to everyone. Sejal and Vanita congratulated them. Naina was talking to someone on phone. Sameer or Papa would come to pick her from station. Nirmala ji shared the good news with them as well. Preeti gave birth to a son. Now the lineage could be carried forward. Rakesh nodded. It would happen because of a girl referring to Preeti. Naina was my daughter and my self-respect. Nirmala ji said it was good that they were happy with what they had but she cannot contain her happiness. It was double than theirs as she had a grandson now. She will celebrate it with pomp and show. She left. Rakesh, Naina and Sameer laughed as soon as she left. Naina, Sameer and Rakesh debated on the baby’s name. Naina reminded them that they should meet Preeti’s baby first. Sameer nodded. He was also very excited to meet him. They went to Preeti’s house. Vishakha, Bela and Anand had come over. They were confused as to which dress should the baby wear first. Rakesh offered to do it. The written update of 09 August 2019 Yeh Un Dinon Ki Baat Hai episode full story ends here.

In the upcoming episode of Yeh Un Dinon Ki Baat Hai, watch society members celebrating in the welcoming party of both the babie. Stay tuned!