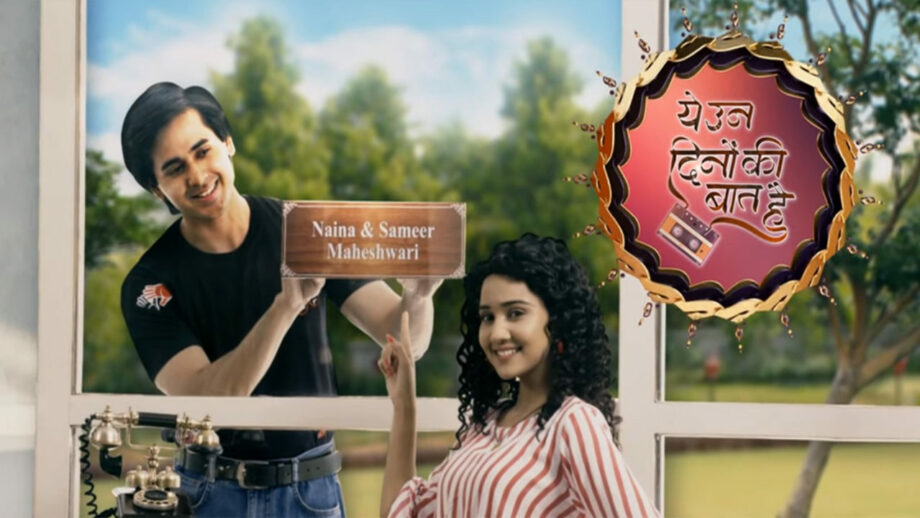 Today’s Yeh Un Dinon Ki Baat Hai 11 June episode begins with Sameer (Randeep Rai) and Rakesh arguing downstairs about the cheque. Vanita and Sejal looked on from their windows. Naina picked up a book but then thought of an idea so Sameer and her timing could match. Rakesh kept arguing. He even gave his sachet to Sameer to check who found the cheque. Rakesh still did not acknowledge that it was his mistake. Naina (Ashi Singh) made a time table.

Sameer and Rakesh reached the acting class. Rakesh asked Sameer if all the heroes, whose photos were there, have learned acting from here only. Sameer said he didn’t know but he will go. He warned Rakesh to not make any noise. Mumbai taught us a lot many things. One such thing was to live alone. he used to do many things by himself there– eat alone, see passerby’s from the window and just think. It wasn’t so in Ahmedabad. One is always alone even when one is in the crowd in Mumbai. This was a bitter truth which Mumbai taught everyone.

Naina called at Preeti’s place. Nirmala ji picked it. She told Naina that she may not have much to do but Preeti had a lot of chores to do. How will it work if she will be stuck on the phone? Naina told her to let it be. Nirmala ji agreed.

The acting class started. The trainer asked them to speak loudly on which Rakesh taunted him that they were already shouting at a high note. He asked Rakesh if he had come here to learn acting. Rakesh nodded. The trainer said it wasn’t just acting which was taught there. They also make them learn how to trust. Rakesh kept arguing with him.

Preeti paid the cable guy. Dadi rang bell incessantly. Preeti said she know it is time for the bath. She noticed knots in her hair and untangled them. She told her that the hair had become trouble. Nirmala ji sarcastically asked her if they should cut it. Preeti agreed which shocked Nirmala ji. She said Amma ji wouldn’t go out to cut hair at this age. Preeti offered to do it instead. She used to do it in Ahmedabad too. She cut Dadi’s hair. Nirmala ji said Amma had never let anyone touch her hair till date. Preeti said she liked it maybe. Time was changing. Nirmala ji and her daughter complimented Preeti. Preeti used the golden chance to ask her MIL if she could do a parlor course.

The trainer spoke of a trust exercise. They shifted the chairs in a corner and practiced it. Rakesh stood there uncomfortably. A girl held his hand but she pushed her away. He questioned her. The trainer called it to exercise. Rakesh called it a bad act. Sameer walked in just then. Rakesh told him to withdraw his name.. Sameer asked him to let him learn and asked him to leave. Rakesh was reluctant. They realized that Sameer is the student and not Rakesh. He took Rakesh aside and asked him to leave for home. He went back to the class. Rakesh decided to find out what they taught there.

Nirmala ji scolded Preeti for even thinking of going out of the house to earn money. She called her spoilt. It must be Naina’s doing. Preeti denied. She had no idea about her plans. All the ladies gossiped about a girl. Her husband had become a very big TV star. He did not care about his wife. They have heard that he was having an affair with his co-star. Naina overheard them.

The trainer told everyone to follow his words. They have to only do as he says. Their eyes, their body should express every emotion. Rakesh felt disgusted thinking Sameer will have to act lovey-dovey with other girls. Sameer stood there hesitantly. The girl told him to think that she was his girlfriend. He was still uncomfortable. Gopal’s wife told Nirmala that Kalyani was doing everything for her husband. She was even bearing his expenses.

Vanita told Sahiba that Kalyani’s husband told her to accept this relation for namesake if she wanted to. He would not keep any relation with her. Sejal felt bad for Kalyani. Vanita said there are many girls like her. Naina stood there tensed.

Sameer recalled the promise he had made to Naina and held the girl confidently. Rakesh looked on from outside. He closed his eyes / looked away seeing Sameer dance closely with a girl. The trainer seemed impressed by Sameer. He clapped for him. He praised him and asked for his name. Sameer told him. Everyone clapped for him. Rakesh thought this was what happens in Mumbai. It had trapped him already.

Gauri and Nirmala ji continued their discussion about Kalyani and so do Vanita, Sejal, and Sahiba. Sejal said Naina is going through the same thing. She must be hurt. Naina denied but then affirmed that she felt bad. Vanita said even Sameer was also going in acting line and warned her that men change. The written update of 11 June 2019 Yeh Un Dinon Ki Baat Hai episode full story ends here.

In the upcoming episode of Yeh Un Dinon Ki Baat Hai watch how Sameer and Naina spend some romantic moments together. Stay tuned!