Yeh Un Dinon Ki Baat Hai 13 May 2019 Written Update of today’s episode we see how Anand and Sameer finalize their house’s deal with Deepak. Sameer gets emotional recalling how he bought that house for Naina. 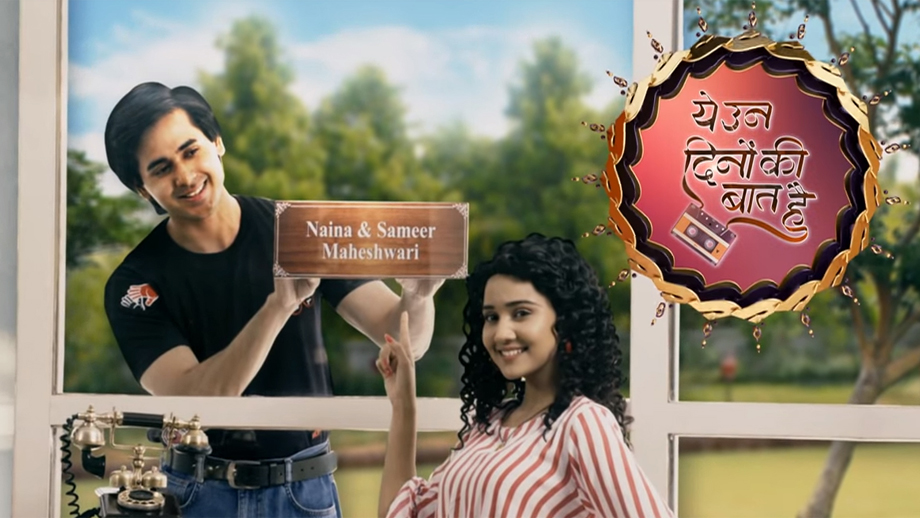 Today’s Yeh Un Dinon Ki Baat Hai 13 May episode begins with Naina (Ashi Singh) and Sameer (Randeep Rai) looking at each other quietly as they sit down for tea. She is all shy while Sameer is smiling to himself. He holds her hand as she hands him the cup. She steals glances at him shyly. She runs to open the door as doorbell rings. Munna and Pundit touch her feet. They hug their friend next. Naina goes to bring tea for them. Munna apologizes to Sameer as they couldn’t push Rakesh Sir to cancel the plan. Pundit adds that they could have done it tomorrow itself but!
Flashback shows Munna and Pundit ruing that their every plan failed.

They overhear Arjun calling Rakesh. He tells Rakesh to keep calling and take care of himself. Arjun tells him not to come to Kanpur. His FIL has strictly told him that Rakesh has no place here. He ends the call. Flashback ends. Sameer tells his friends not to do anything now. Naina and Rakesh Sir must not know anything about it. They all cheer up seeing Naina. They tease Sameer on having Naina Devi and Hitler FIL on his side. They all look at each other with a smile. Rakesh tells Anand and Bela not to worry. Anand says he meant that there is a difference between son and SIL. Rakesh nods.

Anand and Sameer finalize their house’s deal with Deepak. Sameer gets emotional recalling how he bought that house for Naina. Deepak nods. Sameer signs on registration papers. Deepak hands over the papers to his wife. Anand notices Sameer’s sullen face and pats at his shoulder. Naina asks Sameer where he was. Sameer lies that he went to meet the dealer. She notices him looking lost but he suggests having a grand celebration at home this Diwali. She holds his hands. She hugs him. Ye Jeevan Hai song plays. They start packing their stuff. He eyes the blank cover sadly.

The house is fully decked for Diwali. Sameer says this will be their first and last Diwali in this house. He covers up saying that they are shifting to Bombay now. She tells him that they will celebrate every Diwali and Uttarayan with their family in their home. it will be maintained this way! Sameer recalls hiding the truth from Naina. She reminds him of their promise. He smiles a little but she asks him to smile properly. It is Diwali. She closes his eyes and takes him near the pool. There is a heart with N <3 S on the floor. He smiles. She says I brought a smile on your face without turning into Naina Devi. He hugs her sweetly.

Naina and Sameer do puja. She asks him what he asked for. He says I asked for your happiness. She says she asked for 2 things. One, their love should never fade away. Two, they will celebrate Diwali every year in their house! Doorbell rings. She goes to welcome the guests. Munna hasn’t come yet. Pundit says it is his first Diwali with Rewa. He will come in a while. Rakesh says why he gave time to them then. He has always come late which is why I was always strict with him in school. Anand tells him to be strict with Naina and Sameer in Bombay too. Kamya gestures dead sign to Naina and Sameer.

Sameer is still sad and lost. Naina keeps glancing at him as everyone bursts firecrackers. Everyone sits down to play a game. Pundit suggests playing cards but Rakesh dismisses the idea. They decide to play passing the parcel. Anand tells them to play but Pundit asks them to play. It is last Diwali in this house after all. Anand and Bela say we will play too. Anand takes charge of playing music as everyone else starts the game. Swati dances as per her punishment. The girls get emotional hearing the song. Pundit gets caught next. Rakesh asks him to sing Bhajan today. Swati says he can only say poor jokes. Pundit happily says poor shayari for them. Rakesh ends up holding the pillow as music stops. The written update of 13 May 2019 Yeh Un Dinon Ki Baat Hai episode full story ends here.
Read More Sameer and Naina consummate marriage