Yeh Un Dinon Ki Baat Hai 29 May 2019 Written Update of today’s episode we see how Sameer has to lie to all the society members when they start asking about Rakesh. 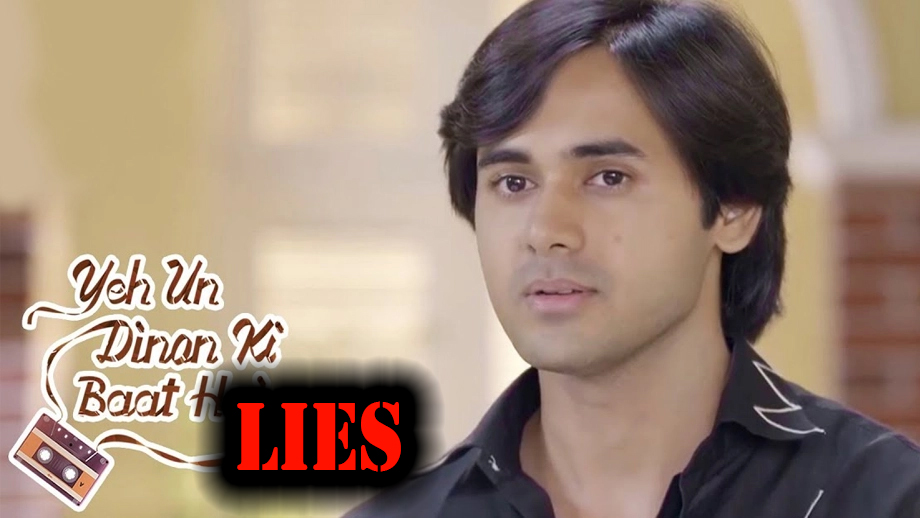 Today’s Yeh Un Dinon Ki Baat Hai 29 May episode begins with Rakesh trying to open the door of Sahiba’s apartment using his key by mistake. Sahiba peeks out of the keyhole and is shocked to see Rakesh. She recalls how he had collided with her earlier. She gets tensed. Naina (Ashi Singh) comes to kitchen but does not see Rakesh anywhere. Rakesh tries harder to open the door. Sahiba calls Vanita. Naina’s Papa is trying to get inside. Vanita tells her to stay put. Naina informs Sameer that Rakesh is missing. He asks her if there is some tradition in their family.

One is found and the other one goes missing. He is reluctant to go but she takes him with her to look for Papa. Rakesh manages to open the door and falls atop Sahiba as soon as the door opens. Vanita comes running there. Other tenants also come there. Rakesh questions Sahiba as to what she was doing in his house. Vanita threatens to call police. Gopal also speaks against Rakesh. Shivani also speaks ill of Rakesh. Even Jatin calls it wrong. Wouldn’t we know what we are up to as you were going to the house of the most beautiful girl of the society?

Sameer (Randeep Rai) and Naina have also come there by now. Vanita calls him characterless. Rakesh says his wife passed away 15 years ago. Vanita tells him this won’t work in Bombay. Sameer says she is misunderstanding him. Vanita refuses to hear anything further but Shivani requests her to listen to Sameer once. Gopal syas it isn’t needed. Naina also requests them to hear them out once. Vanita calls for society meeting. Shivani argues that let everyone decides it in the meeting. Vanita and Gopal agree. Sameer asks Naina to take Papa ji home. Naina tells him that they must stay here to fulfil his dream. He assures her about it. Rakesh heads home with Naina.

Shubham asks Sahiba if she put money in PF. She holds her head. He again speaks of economics. Nirmala ji asks Gopal why they had to call meeting in the middle of the night. He tells her to look around. Vanita says they aren’t nice. People also object to it. Such people are ruining the environment of the society. Gopal tells everyone to speak one by one. Sahiba shares everything. He might have come in by mistake. Vanita says this isn’t right though. Gopal also tells Sahiba to be honest. Vanita speaks against Rakesh and his family. Sameer recalls Naina’s words. He thinks of Munna and Pundit. Everyone looks at him in confusion. Sameer says his brain isn’t functioning properly.

Rakesh is unhappy with whatever happened a while ago. He says he can bear anything but won’t bear it if someone will point fingers at his character. She says they must be mistaken. He says you both understand this but they don’t. Sameer says Naina brought him here for his treatment. Gopal asks him if there is something wrong with Rakesh’s brain. Sameer denies. Rakesh wants to go downstairs. Poor Sahiba must be scared. She stops him. Sameer will manage everything. Rakesh does not trust him but Naina assures him that he will explain everything to them.

Vanita says what if he kills someone. Sameer denies. He is just habitual to staring at people. Gopal says what about his fights / arguments. Sameer replies that he is used to shouting only. Gopal asks Nirmala ji if they should let a half mad guy roam around like this. Sameer says he won’t do anything harmful. They relent. Sameer nods. Sejal says don’t know who is what these days. Vanita whispers that we will still keep a tab on them. The meeting is dismissed. Shubham asks Sameer if Rakesh dint come to the wedding because of his condition. He nods. Shubham says I feel bad. Why dint Preeti tell me this? Sameer looks a little guilty.

Rakesh asks Sameer if he explained everything clearly. Sameer nods. Naina tells him to calm down now. Everything has been taken care of. Sameer looks down. Shubham’s sister asks Shubham what he is saying. He advises her to greet Rakesh from far if she ever comes across him. Nirmala ji says the list of lies is getting long. She refuses to be quiet if someone questions them. She gulps down the entire glass of milk in one go.

Next morning, Naina asks Sameer where they will go today. They discuss about it. Rakesh says is it some puja that they both will go together. Sameer asks him to speak slowly but he advises Naina not to go anywhere with Sameer and focus on CA instead. He leaves. Naina seconds her Papa. The written update of 29 May 2019 Yeh Un Dinon Ki Baat Hai episode full story ends here.

In the upcoming episode of Yeh Un Dinon Ki Baat Hai watch how all girls are gathering at Preeti’s house and she serves Bombhel to all. Vanita asks her if they don’t serve fish in Ahmedabad and Preeti feels pukish. Stay tuned!