Sara Ali Khan is one of the most famous actresses in the newest era of Bollywood. She has wowed us with her grand onscreen performances opposite some of the finest actors in Bollywood. Sara belongs to the Pataudi family, her royal background is the reason why she is always so elegant and pouring with grace. She is the daughter of Saif Ali Khan and Amrita Singh. Sara Ali Khan is popular amongst the millennials, not just for her acting abilities but also for her straightforward perspectives. But leaving all that, she has given some of the major fashion goals, however! She has appeared in this beautiful sexy black one-piece, and she is resembling a diva, undoubtedly!

On the next note, Janhvi Kapoor is the most adored star kid of the country, her fans love her to the core and also relate to her empathetically for her mother, the gorgeous Sridevi, who passed away just before her debut film release. She has gotten an appreciation for her onscreen performances and is often compared with her mother. She is just as lovely as her mother was. She made her Bollywood debut opposite Ishaan Khattar in ‘Dhadak’, which was the Hindi redo of Marathi super hit film, ‘Sairat’. As of now, we are absolutely spellbound by her fashion articulations, especially in this sexy black one piece.

So, what do you think? Which celebrity is killing in the outfit better? Let us know in the comments below. 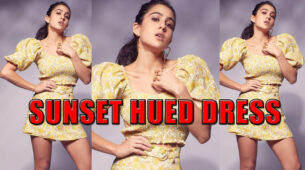