Nick Jonas's amazing transformation from a boy to a charming man

One thing common about Nick Jonas’s career and his body is that it keeps getting better. Nick is the youngest of the Jonas brothers and little did we know that this cute little boy will grow up to be such a good looking man. He gained popularity from being a member of the music band called the ”Jonas Brothers”. He excelled in his music career as the band became famous. But Nick didn’t just stop there he went ahead and worked with Disney channel. He has established his career as a solo artist by acting in movies as well as in music.

If you look back at pictures ten years ago you’ll see a squeaky thirteen-year-old boy who is almost unrecognisable now. He has evolved a lot in terms of his looks and way of dressing. The Disney boy had a clean-shaven face with curly hair back then and a very basic sense of fashion and Now Nick has a sexy haircut and a stubble beard. Puberty hit him really hard and in a very charming way. Nick also worked on his body and has transformed himself into a sexy looking hulk. The abs and the gains looks, like all the time Nick spent in the gym is really paying off. What do you think about Nick’s transformation from a Disney start to Calvin Klein model? I am sure you are as amazed as we are. Check out his pictures to motivate yourselves to hit the gym.

See Pics! When Nick Jonas Got Flirty With Priyanka Chopra On Camera 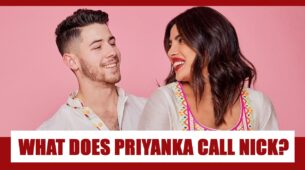