Check out these sexy outfits of Brad Pitt, Neil Patrick Harris, and Robert Pattinson that you can copy!

Brad Pitt, the American Oscar-winning Hollywood actor, has gained popularity with his amazing acting skills. He has inspired many with his old vintage fashion looks for men all over the world. Brad has got a number of sexy looks since the 90s.

On the other hand, the Hollywood actor and comedian, Neil Patrick Harris, who is also known for his both sense of humor and style is undoubtedly a gem. Neil has inspired many with his super-hot and sexy looks

Whereas, Robert Pattinson, the English Hollywood actor, is well-known for his appearance in the ‘Twilight’ movie series. The young actor has made everyone amazed not only with his acting but also with his handsome and sexy outfit collection.

I partnered with @Jif months ago to help solve snack time struggles. Well, my kids are back in school after the holidays, but still want holiday treats. With delicious flavors to choose from and peanuts as the first ingredient, #JifPowerUps are my win-win snack time secret. Lunchbox Stuffer is the new Stocking Stuffer.

Had a blast at the #faoschwarz opening last night, it really is a #returntowonder. Plus, they have a piano you can dance on – a guaranteed good time. @faoschwarz

A post shared by Robert Pattinson (@robertpattinsonofficial) on May 31, 2019 at 8:50am PDT

A post shared by Robert Pattinson (@robertpattinsonofficial) on Mar 31, 2019 at 7:57am PDT

Here are the pictures of Brad Pitt, Neil Patrick Harris, and Robert Pattinson in their looks in the sexy outfits, that you can pick up for yourself and copy! Have a look at them!
Also read: Adorable Fitness Moments Of Chris Evans, Brad Pitt, And Will Smith 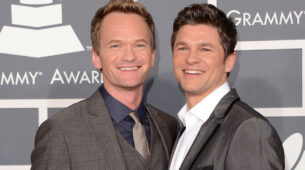