Kajal Aggarwal might be one of the biggest actresses of the South Film Industry today but not many know that she actually made her debut in the movies with a Hindi film titled Kyun! Ho Gaya Na… in 2004. Her first-ever Telugu film released in the year 2007 titled Lakshmi Kalyanam and it helped her immensely in cementing her position in the industry as an A-lister. Kajal has already completed a duration of 16 long years in the industry and experts and critics feel her best is yet to come. Her last Hindi release that gave her a bit of push in Bollywood was Ajay Devgn’s Singham that was a blockbuster in the box office in the year 2011.

Apart from being a mind-blowing actress, Kajal is all someone who’s known to give people major fitness goals. She ensures she keeps her body fit and yoga is what keeps her in a sexy form 24/7. The internet is filled with her sexy and hot pictures and one can simply keep on drooling after seeing her jaw-dropping photographs. So today, we show you 10 of her hottest and sexiest photos that are doing rounds on the internet. Check them out below –

Also Read: How Nayanthara, Tamannaah Bhatia, Kajal Aggarwal, And Keerthy Suresh Made A Fashion Statement In 2020 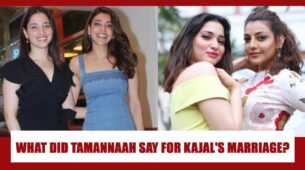